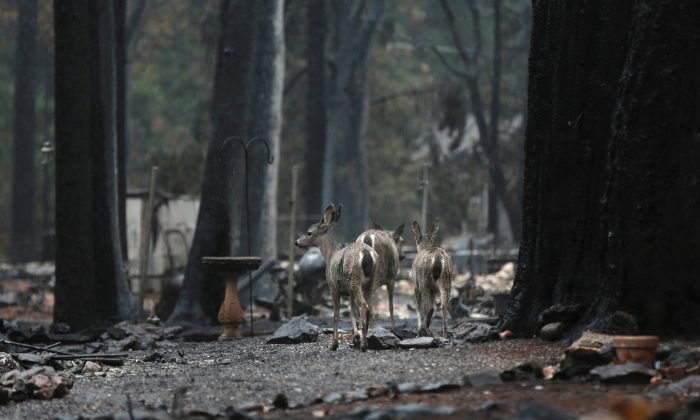 Deer are seen on a property damaged by the Camp Fire in Paradise, Calif., U.S. Nov. 21, 2018. (Elijah Nouvelage/Reuters)
US News

PARADISE, Calif.—Thousands of Paradise residents who fled a monster blaze a month ago were allowed on Dec. 5 to return to some neighborhoods in the Northern California city nearly obliterated by one of the deadliest wildfires in U.S. history.

Tim Moniz, a rice farmer and welder in his 50s, personally surveyed the remains of his Paradise property for the first time since the fire, confirming his suspicions that his house was gone. He and his wife only recently paid off the mortgage.

“It seems unfair that some houses make it and yours don’t,” Moniz said. “I just had to get back up and see it and try to salvage something.”

Paradise residents who return to their ravaged homes will face a daunting task to resume normal life, with some likely to encounter months or even years of work to obtain compensation for their losses and rebuild.

Authorities hurriedly evacuated some 50,000 people in Paradise and neighboring towns when the Camp Fire erupted on Nov. 8. The fire killed at least 85 people with nearly a dozen still unaccounted for. It also destroyed nearly 14,000 homes in the wooded, foothill communities.

Evacuation orders were previously lifted in areas outside Paradise, but Dec. 5 marked the first day officials opened parts of the city itself in the midst of the fire’s scorched wasteland of 153,000 acres (61,900 hectares).

Moniz said he is among those planning to rebuild, rather than move away.

But the fire’s devastation will reshape the town and—at least initially—lower its population, Paradise Mayor Jody Jones said by telephone.

“All my friends who are in their 80s, they’re just not going to go through this process of rebuilding,” Jones said, adding she believes three-quarters of Paradise residents will rebuild.

Some residents may be able to salvage jewelry or even stuff such as intact tool boxes from the rubble of their houses, said Jones, who lost her own home in the fire.

Some residents rumbled back into town in recreational vehicles, apparently planning to spend the night, Paradise Police Chief Eric Reinbold said by phone.

Authorities said they will let some residents stay overnight on their properties, but advise against it because electricity, gas, and other services were not available.

Health and safety specialists are sweeping through Paradise to remove batteries, propane tanks, household chemicals, and other environmental hazards in the aftermath of the fire, Gates said. Residents entering the re-opened areas of town were offered gear to protect themselves from hazardous materials, Reinbold said.