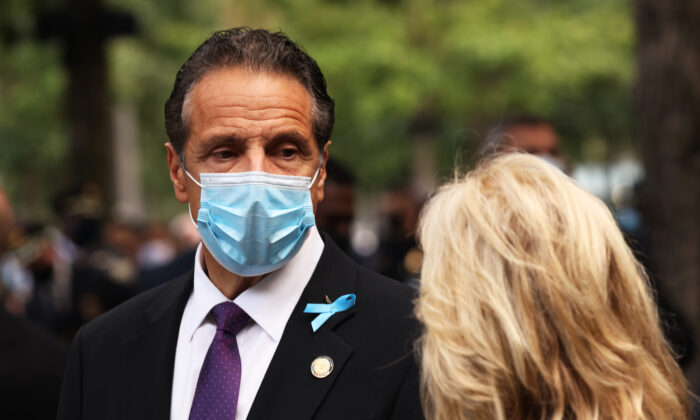 Portions of New York state are on track to be dubbed a “red zone” by officials, which would bar residents from holding gatherings of any size for Thanksgiving, Gov. Andrew Cuomo warned on Monday.

A day prior, Cuomo told reporters that parts of Staten Island, one of New York City’s five boroughs, “will go into red zone at the current rate.”

Under the state’s color-coded system, a red zone is when the harshest measures are employed to try to curb the spread of the CCP (Chinese Communist Party) virus, which causes the COVID-19 disease.

Restrictions for red zone areas include a prohibition against non-essential gatherings of any size; limiting church services to 25 percent occupancy or 10 people, whichever is fewer; the closure of schools for in-person instruction and a ban on all dining, even outdoors.

The orange zone, which precedes the red zone, has slightly looser requirements, including a limit on non-essential gatherings to 10 people.

A portion of the Brooklyn borough of New York City was dubbed a red zone until Nov. 9, when it was transitioned to an orange zone. According to the state’s Health Department website, no areas appear to be in a red zone at present.

Cuomo told the Monday briefing that in his personal opinion, “This is not a normal Thanksgiving.” He said his daughter Mariah, who lives in Chicago, would not be traveling to be with her family in New York because of the COVID-19 pandemic.

“We decide she’s not going to come home for Thanksgiving. And then she starts to cry. She said I feel so bad. I feel isolated. I feel trapped. I feel like I was looking forward to seeing you and I can’t get there. And those of you who have children know when your child cries it kills you, right?” the governor said.

But Cuomo said another daughter told him after he hung up the phone that this Thanksgiving is special because it has more meaning.

Cuomo recently ordered bars and restaurants to close statewide at 10 p.m. and gatherings across the state to include no more than 10 people. He also mandated that gyms close at 10 p.m. each night.

“If you look at where the cases are coming from, if you do the contact tracing, you’ll see they’re coming from three main areas: establishments where alcohol is served, gyms, and indoor gatherings at private homes,” he said in a statement.