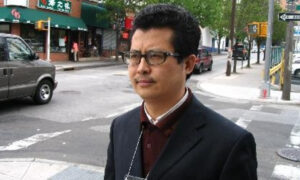 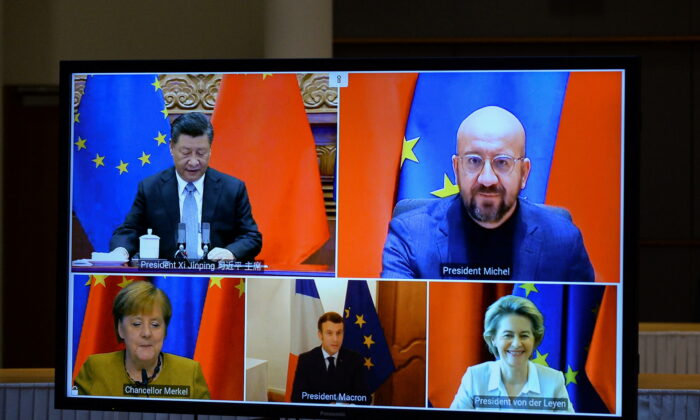 ‘Partner’ or ‘Systemic Rival’: EU Finds Itself at Crossroads on Its China Policy

The European Union’s policy toward China is at a historic crossroads and at times, swinging from side to side and contradicting itself, as revealed by the important events that have occurred recently.

On March 25, Joe Biden attended the EU summit—marking the first time since 2009 that a U.S. president had joined talks with the EU’s 27 leaders—and called for closer U.S.–EU cooperation in dealing with the Chinese Communist Party (CCP) and Russia.

But German Chancellor Angela Merkel insisted that the EU would share “no identity” with Washington on the CCP issue.

“That is absolutely clear,” she added.

However, on March 22, the EU announced its first post-June 4, 1989, sanctions against the CCP regime, coordinating with the United States and its allies. On March 24, U.S. Secretary of State Antony Blinken held talks with European Commission President Ursula von der Leyen and EU Chief Foreign Policy Representative Josep Borrell, and subsequently issued a joint statement with Borrell announcing the resumption of the U.S.–European dialogue on China.

From such a contrasting and somewhat dramatic set of events, we can see that the EU’s policy toward China is at a crossroads.

On the one hand, in the face of the CCP’s economic temptation and hijacking, the EU fell so deeply into the trap that it’s had a hard time extricating itself; on the other hand, the opposing values between the EU and the CCP, the CCP’s global ambition, and China’s “Wolf Warrior” diplomacy made the EU clearly feel the strategic threat and tactical coercion of the CCP, and it instinctively defended itself.

Following the publication of the first policy document on China, “Communication from the Commission—A Long Term Policy for China-Europe Relations” in 1995, the EU issued seven more documents; they include “Elements for a New EU Strategy on China” in 1996, “Building a Comprehensive Partnership with China” in 1998, “The EU Strategy towards China: Implementation of the 1998 Communication and Future Steps for a more Effective EU Policy” in 2001, “EU–China: Commission Adopts New Strategy for a Maturing Partnership” in 2003, “EU–China: Closer Partners, Growing Responsibilities” in 2006, “Elements of a new EU strategy on China” in 2016, and “EU–China—A Strategic Outlook” in 2019.

In these documents, the EU has always seen the CCP as a “partner,” even if it was “not an easy partner”; it wasn’t until 2019 that the EU started to see the communist regime as a “systemic rival.”

However, this is only one of its three visions of the CCP, the other two being a “negotiating partner” and an “economic competitor.” It’s still reluctant to give up its policy and delusions to see the CCP as its partner going forward. Yet, what is a “systemic rival” in its multi-pronged visions? The EU hasn’t given a clear-cut answer, either.

The EU’s long-standing illusions about the CCP may result from China’s decades-long efforts, through united front organizations (pdf) to influence Europe, which it has regarded as a key battleground for its global campaign.

As early as the 1970s, Mao Zedong put forward the “Three Worlds Theory,” supporting European integration and Europe as an independent pillar among the world powers. That was fundamentally aimed at dividing the Western world by pulling Europe away politically, economically, and technologically, as part of the communist regime’s grand scheme and geostrategic jostling across continents.

In the post-Mao era, the EU was further trapped by the CCP’s “reform and opening up,” while European integration came to fruition in 1993, when the Maastricht Treaty entered into force and the EU was established. Consequently, the EU has greatly facilitated the “rise of the CCP” since opening its markets, capital, and technology to Beijing.

Bilateral trade between China and the EU, for example, jumped from $55.68 billion in 1999 to $709 billion in 2020, with China overtaking the United States as the EU’s largest trading partner for the first time in 2020. In addition, China’s long-term trade surplus with Europe ran up to $212 billion in 2020.

Germany takes up a huge share of the bilateral trade between China and Europe, with a total trade volume of $249 billion in 2020, making China the largest trading partner of Germany for the fifth consecutive year.

In another example, the number of EU-invested enterprises in China exceeded 16,000, with 47,224 projects established and a cumulative investment of $131 billion by the end of 2018, according to the statistics of the CCP’s Ministry of Commerce.

The close economic ties between China and Europe have made the EU, and Germany in particular, quite deluded by the CCP. A case in point is that in 2020, when the United States began escalating the trade war with Beijing, Merkel insisted on using her position as chancellor of Germany and presidency of the EU Council to suppress opposition in the EU, in favor of the China-EU Comprehensive Agreement on Investment, despite opposition from the Trump administration and the Biden team.

In response, the CCP has rewarded the EU and Germany with economic enticements, as well as threats along the way. In December 2019, the Chinese ambassador to Germany, Wu Ken, threatened Berlin with retaliation that if it excluded Huawei as a supplier of its 5G telecommunications networks, as well as serious consequences related to cars exported to mainland China.

In other words, while the EU contributed to the “rise of the CCP,” the CCP didn’t ease its pressure and became a growing threat to the bloc. Its economic and technological challenges turned more and more serious, its totalitarian approach became more and more destructive to the rules-based international order, and its “Wolf Warrior” diplomacy has become increasingly assertive on the international political and diplomatic fronts.

Strategically, the confrontation between the communist regime and Europe has become self-evident.

Facing such a grim reality, some forces within the EU are still unwilling to confront it squarely. The mainstream view of the EU on the “rise of the CCP” remains such that the CCP is a partner, a competitor, and a systemic rival of the EU on economic, technological, and global issues.

This view is reflected in the January 2019 report on China by the Federation of German Industries (pdf). According to the report, Germany and Europe should abandon the “trade for change” policy toward China and avoid trying to change the CCP. After more than 40 years of development, China has established a political, economic, and social “hybrid model” with its own characteristics, integrating elements of the state-owned economy and the market economy, and the CCP has developed into a rule-maker from a rule-follower to become a systemic rival to the “open market economies” of Germany and Europe.

The subtext seems to be that Western societies should “coexist peacefully” with the CCP. In the 1950s, Khrushchev advocated the “three peace lines”—“peaceful transition,” “peaceful competition,” and “peaceful coexistence”—between the United States and the Soviet Union, or between socialist and capitalist countries, which soon failed completely.

It’s funny that certain forces within the EU now seem to be picking up former Soviet leader Nikita Khrushchev’s obsolete fantasy again. This is very dangerous.

In a speech to the Czech Senate on Aug. 12, 2020, then-Secretary of State Mike Pompeo said, the threat “posed by the Chinese Communist Party and its campaigns of coercion and control” is greater than the threat that was posed by the Soviet Union.

“What’s happening now isn’t Cold War 2.0. The challenge of resisting the CCP threat is in some ways much more difficult. That’s because the CCP is already enmeshed in our economies, in our politics, in our societies in ways the Soviet Union never was,” he said.

In fact, it’s the EU’s own illusions about the CCP that gave the CCP the power to deter the bloc. The EU truly has an advantage in strength over the communist regime. As Luke Patey, a senior researcher at the Danish Institute for International Studies, points out, Beijing wants to bully European countries with economic threats, but Europe doesn’t need the CCP as much as it thinks it does.

For example, “EU officials often boast that every day over 1.5 billion euros ($1.6 billion) worth in goods flow between the regional body and China. But EU member states trade nearly 30 billion euros a day in total with internal and external partners,” Patey wrote.

Another example is that in 2020, the EU had total foreign trade of $4.2 trillion, a year-on-year decline of 10.43 percent, while total intra-EU trade was $3.3 trillion, down 7.37 percent year-on-year. Evidently, intra-EU trade shows stronger resilience than its external trade.

If the EU is able to overcome CCP’s economic temptation in the short run, then it isn’t so difficult for it to create strategically sound policy on China, and the crossroads will be crossed in just one single step. Prolonged hesitation and delusions will leave the EU in more threatening and deeper troubles with the Chinese regime down the road.