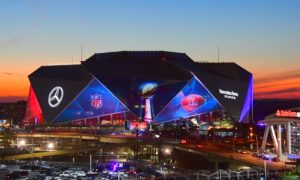 With Helicopters and Dogs, Massive Super Bowl Security in Atlanta
0

A man was shot and killed in an Atlanta mall’s parking lot, according to authorities, who said the dispute appeared to be over parking.

Officials said the shooting occurred when two groups of people got into an argument over the spot. The two groups went into the Lenox Square Mall before the argument escalated when they got outside, reported Fox5.

Someone then opened fire, striking a 25-year-old man twice in the head, said police.

The four suspects in the case then drove off but crashed before leaving the parking lot. They tried to escape on foot, but an off-duty Cobb County police officer grabbed one of the alleged assailants, said police, according to the New York Post.

The man was released without charges, said a police spokesperson.

“At this time, investigators are seeking four persons involved in the incident,” spokesman Anthony Grant told the paper. “The investigation remains ongoing.”

Grant said it isn’t clear whether the 25-year-old victim was alone or with a group.

The shooting is the fourth such incident at the mall in several months, according to local media reports.

“This is a prime concern for us. We have dedicated a tremendous amount of resources to this area and we will continue to do so until we can take back this space,” Atlanta police spokesman Andrew Senzer told Fox5. He said that he believes the mall is still a safe place for the public.

He added to the CBS affiliate: “This is a premier retail space for people to go from all over the metropolitan Atlanta area … This is a prime concern for us. We have dedicated a tremendous amount of [police resources] to this area and we will continue to do so until we can take back this space.”