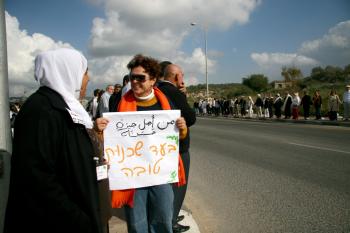 Arabs and Jews hold hands along a street. Despite differences, they have made an attempt to start a dialogue. (Tikva Mahabad/The Epoch Times)
US

Andrea Hayley
Reporting on the business of food, food tech, and Silicon Alley. Studied the Humanities for undergrad, and obtained a Master of Arts in business journalism from Columbia University. I love covering the people, and the passion, that animates innovation in America. Email me at andrea dot hayley at epochtimes.com
View profile
Follow
biggersmaller
Print
NEW YORK—More than 120 advocates of all stripes, from grassroots community groups and alliance groups to the Department of Parks and Recreation, government officials, and well-known community members, gathered Tuesday to celebrate the groundbreaking of the Transmitter Park, a 1.6-acre waterfront park in the North Brooklyn district of Greenpoint-Williamsburg.

A lot of people have fought for more open space in the area, said Stephanie Thayer, executive director of the Open Space Alliance for North Brooklyn.

“This is a long-awaited park for our community,” she said.

“The community has been starved for too long,” said Gerald A. Esposito, the district manager of the Community Board No. 1.

The North Brooklyn community ranks near the bottom per capita in terms of open space available for resident use. While the district is flanked by water on two sides—Newton Creek to the north and East River to the west—for many years, its residents could only sneak through the fences or brave abandoned industrial sites to get to the water.


“This community has been walled off from the water by commercial operations, and that has historically been the story in New Yok City. … For 350 years the waterfront was needed for commerce. It is no longer needed for commerce,” said Parks & Recreation Commissioner Adrian Benepe.

A historic community rezoning in 2005 opened the way for a Waterfront Access Plan (WAP) that includes a 40-foot-wide continuous shoreline esplanade linking sites from the end of Manhattan Avenue in Greenpoint to the end of the North Third Street in Williamsburg.

The current design for the land parcel allows for a new pier at the end of Kent Street, a waterfront esplanade, a small beach, and a pedestrian bridge that will be built across an excavated historic ferry slip. A children’s play zone with a water spray, featuring an ocean theme, will also be designed in the center of the park.

The funds for the development total $12 million, with $9.6 million in city capital funds allocated by Mayor Bloomberg, $500,000 from the New York City Council, $400,000 from Brooklyn Borough President Marty Markowitz, and the remainder provided through grants.

The park will be constructed by the New York City Economic Development Corporation. Completion is slated for 2012, at which point the operations will be passed on to the Parks Board.