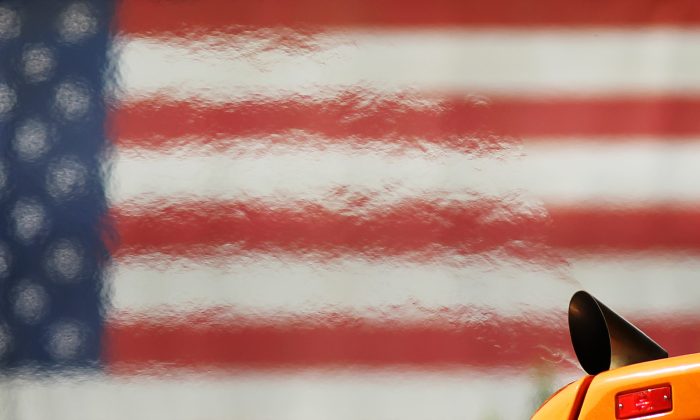 Heat waves emanate from the exhaust pipe of a city transit bus as it passes an American flag hung on the L.A. County Hall of Justice in Los Angeles, Calif., on April 25, 2013. (David McNew/Getty Images)
Opinion

At the 2015 Paris Climate Conference, or COP21, President Obama plans to sign another bad deal for America.

The United States will pledge to reduce greenhouse gas emissions 26 percent to 28 percent by 2025. That won’t stop global warming, and will likely make its consequences worse for most Americans.

Without international action, global temperatures are on track to rise as much as 3.9 degrees Celsius above preindustrial levels. Melting Arctic ice will raise sea levels enough to flood island nations in the Pacific and major coastal cities like Shanghai, expand deserts, and curtail global food production.

Curbing greenhouse gas emissions appears the only viable path available to mankind to limit the devastation.

Curbing greenhouse gas emissions—mostly carbon dioxide, or CO2, from electrical generation, automobiles, and other uses—appears the only viable path available to mankind to limit the devastation.

In Paris, 167 nations are tabling promises to curb emissions or at least change patterns of industrialization to reduce the increase in temperatures by perhaps 1 degree, and agree to processes to achieve additional needed gains in the future.

Sadly, however, China, which accounts for 25 percent of global CO2 emissions, is only pledging to stop increasing those by 2030. Chinese citizens appear little concerned and put little pressure on Beijing to cooperate more constructively.

Sadly, China, which accounts for 25 percent of global CO2 emissions, is only pledging to stop increasing those by 2030.

Other big polluters like India are making similarly vague commitments. Essentially they will promise to reduce the rates of growth in greenhouse gas emissions, not to cut them overall.

The argument goes per capita incomes are much lower in those nations, and they need more flexibility to pull millions out of poverty. Yet, Gambia and Ethiopia, two of the poorest nations on the planet, are pledging to reduce its emissions absolutely.

Prior to the Obama administration’s big push to raise automobile mileage standards and reduce electric utility and manufacturing emissions, the U.S. accomplished a 9 percent reduction in CO2 emissions from 2005 to 2011, thanks to consumer demand for fuel efficient vehicles and market pressures on industry to keep energy costs down.

Now, the U.S. Environmental Protection Agency (EPA) and other federal agencies are forcing accelerated reductions on U.S. industries to meet harsher COP21 targets. That makes energy more expensive and encourages manufacturers to relocate to China where environmental enforcement is lax.

Scientists at Harvard, the University of California and the University of Maryland have demonstrated that shifting manufacturing to China increases global CO2 emissions, because it uses fossil fuels so inefficiently.

Advocates of the COP21 process overlook those market responses when promising a 1 percent reduction in global temperatures by handcuffing industry in advanced economies. Enough reductions in greenhouse gas emissions simply cannot be realized without compelling China and other dirty economies to finally clean up and make the same sacrifices as the rest of humanity.

Enough reductions in greenhouse gas emissions simply cannot be realized without compelling China and other dirty economies to finally clean up and make the same sacrifices as the rest of humanity.

Since the beginning of this century, U.S. growth has slowed to 1.8 percent a year from 3.4 percent the prior two decades thanks to trade, currency, and environmental policies that unfairly advantage Chinese and other Asian economies that will spew ever more pollution into the global commons. The COP21 process will make this situation worse.

Millions of Americans are without decent jobs, and governments at all levels are strapped for adequate tax revenue to provide vital public services and honor commitments to the elderly through social security and other public pensions.

Moving populations and economic activities will cost trillions of dollars, and an economy impoverished by mindless micromanagement from Washington to meet COP21 commitments simply won’t be able to generate the tax dollars to foot the bill.

Americans may be forced to abandon farms and cities and increasingly fend for themselves, as Washington will not be able to sustain the essential elements of civilization.