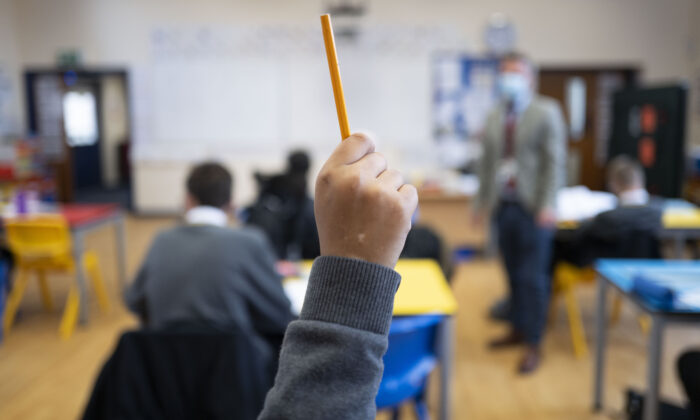 Wales will roll out compulsory sex education plans that it says will “gradually empower learners” from a young age in subjects such as equity, sex, gender, and sexuality, but child protection advocates are taking the government to the High Court in an attempt to remove its mandatory element.

Kim Isherwood, who chairs the group Public Child Protection Wales, has started a legal case representing 5,000 parents and grandparents to overturn a proposal by the Labour-led administration to make a new standard of Religious and Sex Education (RSE) lessons compulsory.

They say that children as young as 3 will be taught “sensitive and arguably inappropriate topics,” such as gender ideology, and that parents are being disenfranchised by “being denied their time-honoured right to remove their child from sex education.”

Isherwood told The Epoch Times that she expects they will get a response from the court in early June.

The case, first announced in late April, has the backing of academic Professor David Paton who has argued that the role of such public policies has little or no impact on reducing early pregnancy but can have even the effect of increasing early sexual activity.

Isherwood and the group have major issues with Wales’ sex education legislation and said that it was a “war on children” and that it was not like the stand-alone lessons that pupils and parents are used to.

Public Child Protection Wales, which calls itself a parent-led charitable group is “concerned at the way national and local Governments have often failed children in terms of safeguarding and education.” Their aim is to remove the Relationships and Sexuality Education Code (RSE) from the mandatory element of the Curriculum and Assessment (Wales) Act 2021 which starts this September.

The Welsh government is making RSE a statutory requirement in the new curriculum, which will be introduced in 2022, which it says will “gradually empower learners at developmentally appropriate stages.”

It insists that there is “a legal requirement that this be developmentally appropriate” which means that “children will receive learning that is appropriate to their age and maturity.”

Across the learning strands, curriculum content in RSE must “be inclusive and reflect diversity,” it said.

“It must include learning that develops learners’ awareness and understanding of different identities, views and values and a diversity of relationships, gender, and sexuality, including LGBTQ+ lives,” it added.

The Welsh government said that its RSE is in line with the principles (pdf) of the United Nations Convention on the Rights of the Child (UNCRC), all children and young people have the right to receive high quality, holistic and inclusive education about relationships and sexuality.

Though last December, the sex education legislation was criticised for almost entirely removing the word “sex” from its curriculum along with the terms “male,” “female,” “boys,” “girls,” “straight,” or “heterosexual.”

“The risk to children is they become very confused, they will get information their brains are not ready for,” said Isherwood. She added that parents are being told that RSE is “age and developmentally appropriate” but she believed that there is no assessment tool or scientific statement to define what that is.

The mum of two from Port Talbot added that she also had concerns for children with autism who she believed may be more susceptible to some aspects of gender ideology.  Isherwood has a BSc degree in criminology & social policy, and a master’s degree in applied criminal justice and criminology.

“I’ve spent the past 15 years promoting inclusion and children’s rights. Sex education is a big thing of what I do, so for me to stand in here saying this is wrong, it really, really is wrong,” she said.

A spokesperson for the Welsh government provided a statement saying that “it is disappointing that this group continue to promote incorrect and misleading claims about Relationships and Sexuality Education in Wales’s new curriculum.”

“RSE is designed to safeguard all our children and young people, supporting them to develop knowledge, skills, and behaviours that will assist in protecting them throughout their lives and enhance their well-being,” he said.

“These reforms have been welcomed by a number of respected organisations including the NSPCC, the Children’s Commissioner’s Office, and Welsh Women’s Aid,” he added.

The Welsh government would not clarify what was incorrect and misleading about Public Child Protection Wales claims about RSE.

Professor of industrial economics at Nottingham University Business School David Paton, whose work on teenage pregnancy has been cited widely in academic literature, told The Epoch Times by email that he had concerns about the RSE proposals in Wales.

The Welsh RSE Guidance (pdf) for 11 year olds writes that “understanding how all are entitled to safe and pleasurable relationships and recognising the role consensual sexual activity plays within healthy relationships” and “understanding the legal age of consent” are key outcomes.

“This is in the Sexual Health section for children 11 years and over. The obvious danger is that the message is being given that “are entitled” applies even to underage children in the context of sexual relationships,” said Paton.

Paton pointed to a study in the Cochrane Review of evidence that argued “there is little evidence that educational curriculum‐based programmes alone are effective in improving sexual and reproductive health outcomes for adolescents.”

“Another crucial issue in the guidelines is the lack of any understanding of the crucial role of parents in monitoring what SRE [sex and relationships education] materials are provided to their children. e.g. there appears to be no mechanism for parents to opt their children out of what they deem to be inappropriate SRE, or material that is just being presented at too young an age,” he added.