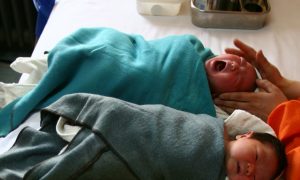 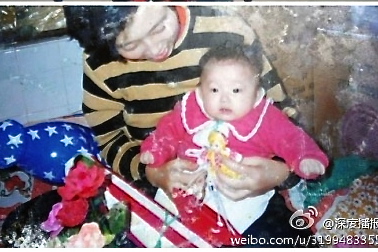 Tang Haixia with her daughter Chen Jiamin in 1989 shortly before birth control officials took away the baby on grounds that the child was born before the parents were legally married. (Screenshot from Internet)
China

Fourteen years ago, Chinese birth control officials took a couple’s three-month-old baby girl away by force. The parents have never gotten over the pain of losing their daughter and are still fighting to learn her whereabouts, in the hope of being reunited with her.

Chen Huaju and Tang Haixia from Haihe township in Jiangsu Province lived together as an unmarried couple when their baby daughter Chen Jiamin was born. In 1998, three months after Jiamin’s birth, the couple went to get their marriage license so they could obtain a residency certificate for their baby.

Soon after, Chen was arrested for “brawling in public” and spent one year in jail. During her husband’s detention, Tang and baby Jiamin moved in with an aunt.

On May 11, 1998 local “birth-police” forced their way into their home and took Tang and the baby to the family planning office.

That night, officials named Yuan Xiang and Chen Xiang (no relation to the dad), took the baby away without providing any reason or documents.

Since then, the couple hasn’t seen their child and has been fighting to learn of her whereabouts and get her back. But officials have been uncooperative for over 14 years now.

Earlier this month, the couple decided to post their story online, and Radio Free Asia (RFA) subsequently ran a story on them.

Chen and Tang said they repeatedly appealed to birth control officials and township authorities for help in finding their daughter. Over time, many personnel have been replaced and those in office now don’t consider it their problem.

Chen said he was also told to keep his mouth shut.

“They said that my child was born before the marriage registration, she was not protected by law, and that I should not argue with the government,” he told RFA in a June 19 interview.

Chen Xiang, the local birth control staff member, denied his involvement in the disappearance of baby Jiamin, but another official, Ms, Ren Cuixia, confirmed to RFA that Chen Xiang did remove the baby.

However, Ren defended Chen’s action saying, he did it “because no one claimed this baby. The birth control committee had a meeting and decided that no one wanted this baby, so she was sent to a welfare house.”

But the parents say they have never stopped claiming the child as theirs, and they hope that public pressure and exposure will bring their child home and restore their family.

China’s family planning policy has been condemned by many rights groups and individuals. Women’s Rights Without Frontiers urged President Obama earlier this month to discuss ending the coercive enforcement of China’s One Child Policy with Chinese leader Xi Jinping during their meeting in California, saying, “This brutal policy causes more violence against women and girls than any other official policy on earth, and any official policy in the history of the world. It is state-sponsored violence against women.”

One of the consequences of the Chinese regime’s One Child Policy is the trafficking of babies, both boys and girls.

The U.S. State Department in its annual report released June 19, accused China of failing to meet minimum standards in fighting human trafficking, ranking them on a par with North Korea and Syria.

Written in English by Gisela Sommer.