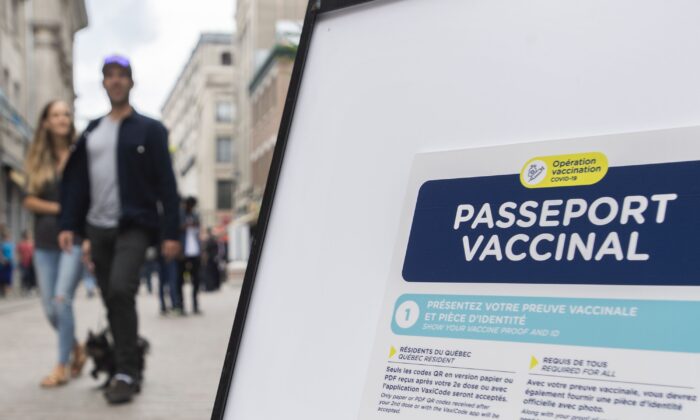 A sign outside a restaurant in Montreal advising customers of the Quebec government’s newly implemented COVID-19 vaccine passport, on Sept. 6, 2021. (The Canadian Press/Graham Hughes)
Canada

Like most teenage boys, 14-year-old Jonathan Smythe has activities he’s passionate about, such as swimming, dancing, and bowling. But for him and his Vancouver-based family, perhaps their greatest pursuit is the task of just keeping him alive.

Smythe was born with multiple health complications including CHARGE syndrome (a genetic disorder), Goldenhar syndrome (a rare congenital condition), and epilepsy. But even the common cold can be deadly for him, causing his organs to break down quickly. In the latest scare to land him in hospital, he almost died when his lungs filled up with his own secretions.

“We’ve almost lost him many times,” said his mother, Debbie, who asked to use aliases to keep their identities private.

So when Health Canada approved COVID-19 vaccinations for those as young as 12, Debbie ensured her son was first in line. Even with limited information on the vaccine’s safety record, inoculation was an obvious choice.

“For him, if he died because he got the shot, he would have died because we were trying to save his life,” she said. “But for us, it was worth the risk.”

For 19-year-old Kalvin Niebel of Île-des-Chênes, Manitoba, a different group of variables come into play.

Niebel has both physical and cognitive disabilities related to his cerebral palsy. He also suffers from life-threatening allergies, carries an EpiPen, and almost died after he received a half-dose of an influenza vaccine as a child. Not surprisingly, his doctor advised his parents to avoid having him vaccinated.

Given their son’s situation, Niebel’s parents must evaluate the data beyond what is safe for somebody who is able-bodied.

“Parents of special needs kids organically fall into this category where we do the research on our own, and when our doctors suggest treatments we need to learn the good and the bad with everything,” said his mother, Stacey Niebel.

“I am not saying this vaccine is bad. I’m saying we don’t have the long-term research, so we’ve chosen to wait at this time to see what the outcome of this vaccine is.”

Parents of children who are at greater risk because of their disabilities must weigh the possibility of their kids contracting COVID-19 against the potential side effects from vaccination.

Balbir Grewal wrestles with that question almost every day. When her son, Karan, was 6 years old, he suffered a tragic setback when his autoimmune system attacked his spinal cord, causing transverse myelitis. He was left a quadriplegic, and for the past eight years, she and her husband have had to gauge every medical decision based on the information they can gather.

The cultural conversation surrounding COVID vaccines, Grewal argues, is becoming polarized, and too many people are painting their ideological opponents as modern-day bogeymen.

“I just feel it’s been so politicized, pitting people against each other, where you’re feeling judged because of your decision,” she said. “And for me, I feel like I’m on a rollercoaster where one day I just think we should get it done, and then the next day, no we shouldn’t.”

‘I Don’t Think It Should Be Mandatory’

Vaccine mandates are beginning in several provinces this month. Manitoba and Quebec have already instituted vaccine passports, British Columbia’s passport will come into effect this week, Ontario and Newfoundland have promised to bring their own versions this month, and Nova Scotia has announced similar plans.

By having to demonstrate vaccination status, some special needs families are expressing concerns, wondering whether more information will be added to the passports and how long the restrictions they face for not vaccinating their children will last.

“The passport restricts Maxx from going to a lot of areas, and I don’t think it should be mandatory,” Soehn said.

She also worries that the passports might be a gateway to more threats to privacy, and she questions whether they might be expanded to include further medical requirements, or worse, become compromised by computer hackers, who already tapped into Canadian medical records in 2019.

“When you do get a vaccine, you used to get a card. Why do you get a barcode with your information where it can be hacked? So now you’re opening a door for hackers to get into it. It happens every day. Nothing is secure anymore.”

The models for the different passports vary slightly depending on the province. In Manitoba and British Columbia, for example, there are no exemptions, while Quebec guidelines grant exemptions for those who meet certain criteria. Ontario’s measures remain murky as officials are still crafting policy, while Newfoundland has suggested it would likely embrace Quebec’s model.

Quebec’s website outlining its protocol on vaccine passports does not mention a potential end or reassessment date. The same applies to Manitoba’s COVID-19 website. In British Columbia, the proof-of-vaccination measures are supposed to be temporary, and re-evaluated on January 31, 2022.

A provincial spokesman for Manitoba Health and Seniors Care said in a statement provided to The Epoch Times that “a significant amount of work has been done in collaboration with the special needs community. As a result of these discussions, we were able to tailor our vaccination campaign and place a focus on addressing their needs.”

However, the Niebels question the effectiveness of those discussions considering they’ve seen Kalvin’s therapies, activities, and social opportunities virtually vanish.

Kalvin’s father, Larry, who races cars as a hobby, says he can no longer take his son to the speedway as a spectator until he is vaccinated. Nor can Kalvin attend professional sporting events as well as other activities in Manitoba. And because Kalvin’s therapies are provided through the education system, including the programs to prepare him for life after school, he is missing a vital portion of his development.

“I don’t think any limitations should be put on any child. We don’t put limitations on our child. He plays baseball, he rides a quad, and these are things he does with our entire family’s hard work. You take that away and he wouldn’t be where he is today.”