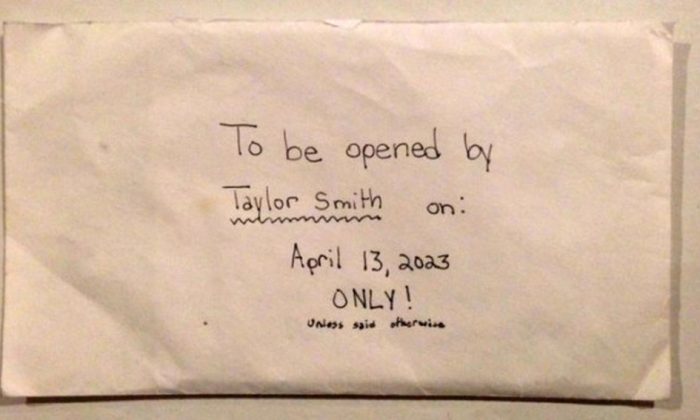 A teenage girl’s letter to herself before she died is a heartbreaking reminder that life, sometimes, is all too short.

Tim and Mary Ellen Smith’s 12-year-old daughter, Taylor, passed away due to complications from pneumonia.

They had to go through her stuff in the family’s Johnson City, Tennessee, home, and found a note that she had written to herself that only she was supposed to read in the year 2023.

(YouTube/screenshot)Here’s what the letter says, in part:

How’s life? Life is pretty simple right now (10 years in your past). I know I’m late for you, but as I’m writing, this is early, so; congratulations on graduating high school! If you didn’t go back and keep trying. Get that degree! Are you (we) in college? If not, I understand. We do have pretty good reasoning, after all.

Don’t forget, it’s Allana’s 11th birthday today! Sheesh, 11 already? In my time, she just turned 1! I didn’t get to go to that party though, because I was in Cranks, Kentucky for my first mission trip. I’ve only been back for 6 days!”

She then asks herself if she’s “gone on any more mission trips” or asks if she’s “been out of the country yet?” or “how about on a plane?”

Later, she wonders if Doctor Who is “still on the air?” And, “If not, what regeneration did they end it with? You should go watch some Doctor Who! Later though, you gotta finish reading your own words of wisdom!”

“Do you have your own place yet? If we’re in college, what are we majoring in? Right now, I wanna be a lawyer.”

“Have you been to Dollywood recently? Right now, their newest attraction is the Wild Eagle. It’s so fun!

Also I think I’m going to sell my iPad and buy an iPad mini, Don’t forget to tell your kids that we’re older than the tablet! Attached I also have a drawing of an iPad, so you can show them.

Well, I think that’s all. But remember, it’s been 10 years since I wrote this. Stuff has happened, good and bad. That’s just how life works, and you have to go with it.

Holly Butcher of Grafton, Australia, wrote about life as death closed in.

She wrote that it was strange to accept death at a young age.

Letter penned by Australian woman, 27, on her deathbed goes viral: 'Be grateful for each day' ❤️ http://peoplem.ag/ONyV6cR

“I always imagined myself growing old, wrinkled and grey—most likely caused by the beautiful family (lots of kiddies) I planned on building with the love of my life. I want that so bad it hurts,” she wrote.

“That’s the thing about life; It is fragile, precious, and unpredictable and each day is a gift, not a given right,” she added. ‘The days tick by and you just expect they will keep on coming; Until the unexpected happens.”

The young woman learned about not worrying about “meaningless stresses in life” like getting stuck in traffic, chipping your nail, or stressing over a flabby belly.

“Let all that [expletive] go. I swear you will not be thinking of those things when it is your turn to go,” she said.