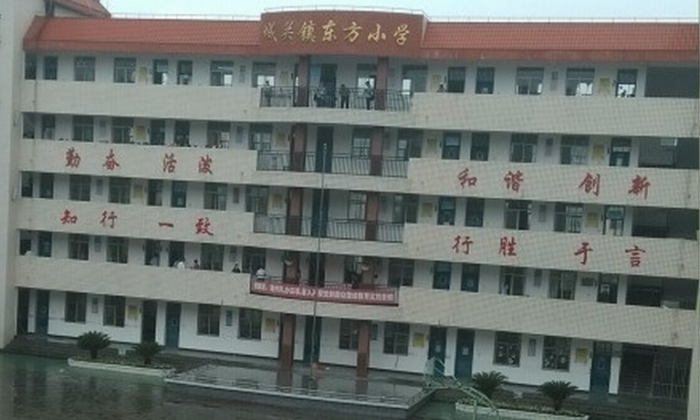 Parents and others gather around the Dongfang Elementary School building in Yunxi County, Shiyan City, Hubei Province. On Sept. 1 a parent killed three students and a teacher before jumping to his death. (Screenshot/Weibo.com)
China

A man stabbed and slashed nine people with a fruit knife, killing four of them, including one teacher, before leaping to his death at an elementary school in central China’s Hubei Province on Monday.

The 43 year-old Chen Yanfu was the father of a student that attended Dongfang Elementary School in Yunxi County, Shiyan City, of Hubei.

Monday Sept. 1 was the first day of school this year.

Chen made his way to the fifth floor of the school and slipped into one of the Grade Five classes. Without a word, he produced the knife and began stabbing the students. A teacher in the classroom was stabbed in the chest while trying to stop the man from killing students, according to a teacher at the school speaking to the Chinese press.

Two teachers burst into the classroom after hearing the screams and forced the assailant into the stairwell. When he realized the police were coming, Chen ran to the top of the five story building and jumped to his death.

Three students died from severe wounds on the way to the hospital, and the teacher died from a lung injury in the evening after being rescued. Another five students are still being treated.

An initial statement from the local police bureau said that Chen was angry that the school prevented his daughter from registering for the new semester, because she didn’t finish her homework over the summer break.

The incident has provoked heated discussion on China’s Internet. Internet users were outraged at the viciousness of the attack, though were also interested to know what drove him to such a terrible end.

“Why didn’t the school allow the student to register? The child didn’t do anything against the law, and should be allowed to attend school based on the Compulsory Education Law. Whose fault is it? As a parent, I can understand his feeling when his child has no school to go,” wrote Lian Xiang.

Other Internet users were concerned about security at schools, especially given the series of knife attacks over the last several years around China.

On May 20, 2014, a man holding a kitchen knife rushed in an elementary school in Macheng City of Hubei Province, slashing and stabbing seven people including three children.

On May 15, 2013, eight men armed with axes and metal bars severely injured four students at a middle school in Hengyang City of Hunan Province.

On Dec. 14, 2012, a 36 year-old man stabbed 23 students and a villager at an elementary school in suburb area of Guangshan County of Henan Province.

On April 28, 2010, a man slashed 18 students and a teacher at an elementary school in Zhanjiang City of Guangdong Province.