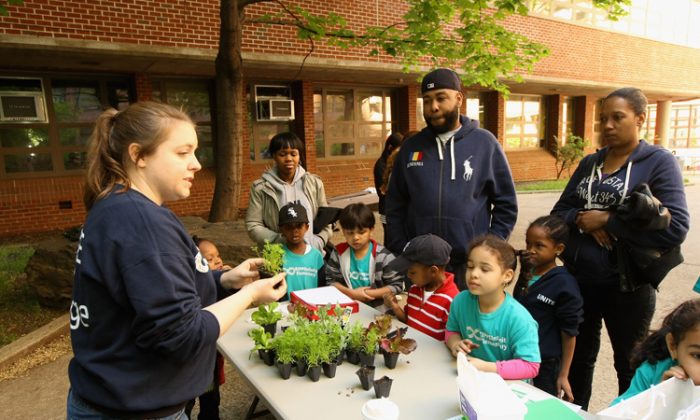 Students at the KIPP Infinity Charter School in New York, N.Y., attend the American Heart Association Teaching Gardens Planting in Harlem on May 12, 2012. The presence of charter schools is viewed as a way to create school choices and parental engagement, according to the Parent Power Index. (Neilson Barnard/AHA/Getty Images)
US

The new tool is called the Parent Power Index (PPI). Parent Power refers to parents’ access to quality education and information, according to the PPI website. The index, created by the Center for Education Reform (CER), is much like an interactive report card.
Parent Power is made up of five elements: charter schools, school choice, teacher quality, transparency, and online learning. If a state does well in these areas, then their PPI is high.

Kara Kerwin, director of external affairs at the CER, helped develop the PPI. She said that the elements of Parent Power have been under study since 1996.

“The value that these schools have where parents can make a choice is so critical and increases student achievement,” she said. With systems and policies in place that do not put parents in charge, Kerwin said that parent engagement is very hard.

“For example, one element on the PPI is transparency, so how good the information parents have about their schools is really important,” she added.

“It’s not really clear or transparent when they can be voting for the officials that run and operate the schools. So, that’s an important aspect of what gives people power,” Kerwin said.

Vouchers, which give students the tax funds to go to any school of their choice, and scholarships can change lives dramatically, according to Kerwin.

Also taken into account in the PPI are whether or not the state has a parent trigger law, how pro-reform the governor is, and how well the state’s media reports education reforms. The Media Bullpen tracks and rates media’s reporting on education reforms.

According to Kerwin, PPI is all about giving parents information and the power to know they can do something. It’s about informing them on whether or not they have access to choices—and letting them know that they can make choices.

A pioneer in school choice, famed economist Milton Friedman, who pushed for free and open markets and once advised Ronald Regan, dedicated the last years of his life together with his wife, economist Rose Director Friedman, pushing for school choice. Their view, according to the Friedman Foundation for Educational Choice, is that schools educate better when they are forced to compete. The Friedman Foundation is a source for considering school choice in the PPI.

The element of charter schools in the PPI is ranked by The Essential Guide to Charter School Law 2013 National Ranking and Scorecard, online learning is ranked by Digital Learning Now!, and teacher quality is ranked by the National Council on Teacher Quality.