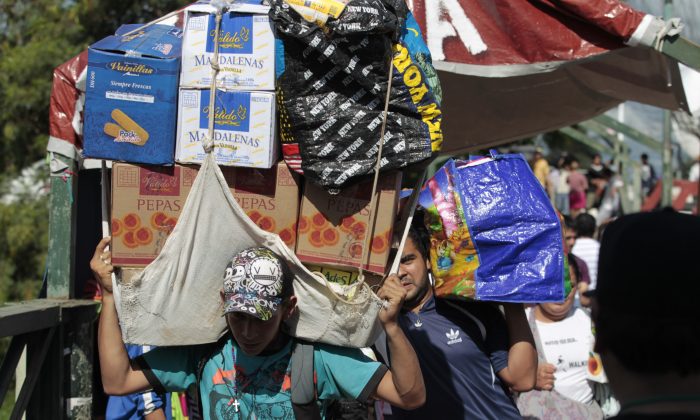 Paraguayans returning from shopping in Clorinda, Argentina, carry boxes and bags across the international bridge over the Pilcomayo River into the town of Nanawa, Paraguay, in this June 1, 2013, photo. (Jorge Saenz/AP Photo)
Americas

The upward trend of prices on items imported into Paraguay continues with no end in sight.

Inflation on imports was 9.3 percent higher in 2021 than it was in the same recorded period in 2020, making it the highest level recorded since 2005, according to a study by the Central Bank of Paraguay.

Benitez is a resident of Encarnación, Paraguay, a city located on the Paraná River.

She said the city has been running short on things such as fruits and vegetables for months.

“It’s an ugly situation made even harder by unemployment,” Benitez said.

In Asunción, resident Silva Torres told The Epoch Times, “Fuel [gas] prices are through the roof.”

Torres stated that you can’t even buy fish in the nation’s capital these days, due to critical shortages driving inflation.

The price of gas in the country, which imports all of its petroleum-derived fuels, has gone up four times in 2021 due to global demand as economies continue reactivating.

Torres says prolonged drought conditions in the region are affecting the ability of container ships to travel on riverways, bringing imports and exports to a near standstill.

Drought has also hit the local fishing industry hard, affecting small towns that rely on the maritime industry for income along the Paraguay and Paraná rivers.

When asked if the inflation was noticeable in supermarkets, Torres responded, “Oh my, yes! We very much feel it in the markets.”

The Paraguay and Paraná rivers are of vital importance to trade and commerce between the “southern cone” nations of Paraguay, Brazil, Bolivia, and Argentina, all of which are participating members of the South American trade bloc Mercado Común del Sur.

The trend of diminished water levels in the rivers began three years ago and reached record lows in 2021.

Transport for large vessels in these conditions has become difficult—or impossible—in some parts.

Hydrology engineer José Luis Ávila pointed out that the historically low water levels are atypical for this time of year, with no significant rainfall recorded near the Paraguay or Paraná rivers. Consequently, they have a depth of only 11 inches in some places that normally see a lot of shipping traffic.

The economic consulting group MENTU stated that the high costs of sea freight, combined with the rise in international fuel prices and delayed transit, are the primary factors driving the nation’s historically high inflation.

“This could limit the availability of imported goods in demand at the end of year festivities, which are times of greatest consumption,” the organization stated in the Financial Pulse section of their website.