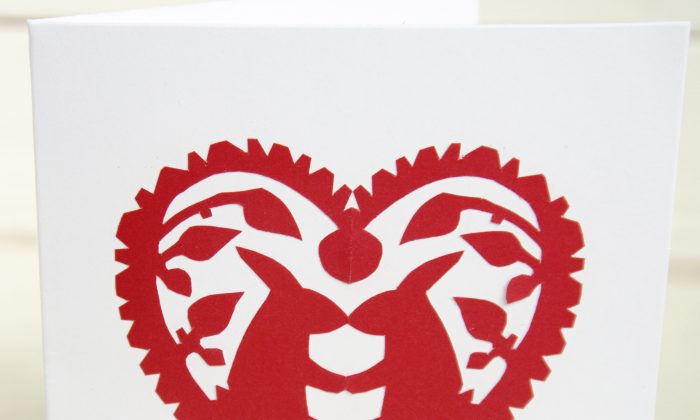 I have a Polish heritage, so I suppose it’s not surprising that as I travel along my creative journey I am finding inspiration in traditional Polish folk art — specifically paper-cut designs or Wycinanki as they are known in Polish.

Below is a little history of wycinanki and an easy project for you to try with a free downloadable template.

The origin of wycinanki (pronounced vih-chee-non-kee) is shrouded in mystery. Some say it originated in the 19th century in rural areas with farmers cutting decorative designs into sheep skins and bark with sheep shears, before moving on to paper as it became more readily available. Other say the tradition goes back much further.

Unlike many folk art objects, which are both functional and decorative, wycinanki were used purely for decoration in people’s homes, being pasted to white-washed walls, ceilings and beams, and also used on furniture. They became popular in the mid 19th and early 20th centuries, before the custom of decorating the home in such a manner began to die out.

There are two styles of wycinanki that originated in two different regions of Poland. Those from the Kurpie region of east-central Poland are single coloured, often black or red, and cut from a piece of paper that is folded once or several times, making the image symmetrical.

Designs are inspired by nature and geometric shapes. Common motifs include trees, cockerels, birds, woodland scenes and floral designs, all familiar sights to the folk artists who lived in the vast forests of the lowland plains. Circular or star-shaped medallions are also popular.

Those from the Lowicz region of central Poland are made up of layers of colourful paper. They can have many lines of symmetry or be non-symmetrical, such as depictions of scenes from village life or festivals and weddings.

Because shears were traditionally used to cut the designs, the cuts are mostly straight, making diagonal, comb-tooth, and arrow shapes common features of designs. You may remember making paper snowflakes or paper doll chains as a child using scissors and folded paper — the technique for making wycinanki is exactly the same.

Make your own papercut

My design is inspired by those of the Kurpie region, featuring a woodland scene, having a single line of symmetry and cut from a single colour.

3. Using sharp scissors, cut out all the white areas on the inside of the heart, being careful not to cut through the folded edge near the rabbit’s nose and paws.

4. Cut around the outside edge of the heart to remove the excess paper, then holding the paper and template together, snip out all the little triangle shapes around the outer edge.

5. Discard the template and unfold your piece of paper to reveal your masterpiece!

6. Mount your papercut on a card using spray adhesive or craft glue, being careful not to tear it.

7. Try using different coloured papers or making up your own designs.

This article was originally published on the blog ‘Here and Far Scrapbook’, www.hereandfar.wordpress.com