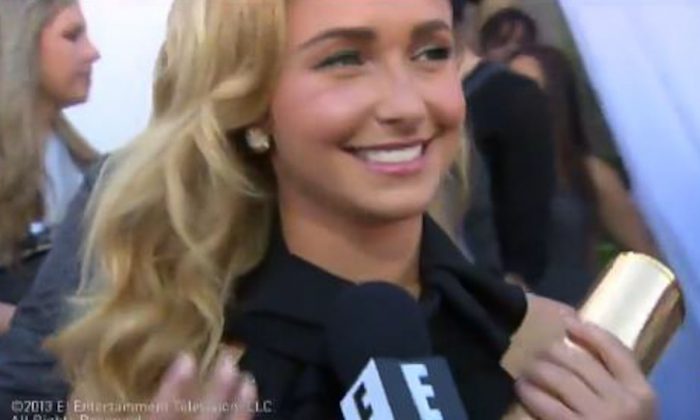 "Nashville" actress Hayden Panettiere shows E! News she is not wearing an engagement ring at the Billboard Music Awards, May 19, 2013. (Screenshot/E! News)
Entertainment

Panettiere rumors: Actress Hayden Panettiere of ABC’s Nashville said, “no ring,” when asked if she is engaged to her boxer boyfriend.

Panettiere, 23, was rumored to be engaged after she was spotted by People magazine with a diamond ring on last week. The ring was on the wrong hand, but the right finger.

E! News caught up with the actress at the Billboard Music Awards on Sunday and asked her about the rumored engagement. She held up her hands and responded, “No ring.”

She dated Ukrainian boxer Wladimir Klitschko for two years, before they split in 2011, but they rekindled their romance earlier this year.

“It’s like the 2.0 version,” she told Glamour. “I’ve always had great relationships and stayed really good friends with the guys I’ve dated. It blows my mind sometimes that us getting together has gotten so much attention.”