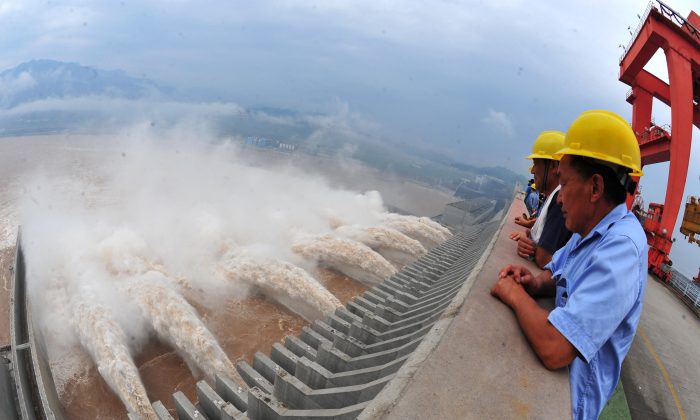 Workers watch the water released from the Three Gorges Dam, a gigantic hydropower project on the Yangtze River in Yichang, central China's Hubei Province on July 24, 2012. (STR/AFP/GettyImages)
By Olivia Li

Researchers at Yangtze River Fisheries Research Institute, Chinese Academy of Fishery Sciences, announced that the Chinese paddlefish, often referred to as China’s “aquatic panda,” is extinct. Prior to this declaration, it was listed as “critically endangered, possibly extinct” by the International Union for Conservation of Nature.

The news was published in a research paper on Science of The Total Environment on Dec. 23, 2019. The authors estimated that the once commonly found paddlefish became extinct between 2005 and 2010.

“The mega river ecosystem of the Yangtze River was once home to diverse aquatic megafauna but is increasingly affected by various anthropogenic stressors that have resulted in continuous loss of biodiversity,” the research paper read, “The Chinese paddlefish, Psephurus gladius, was one of only two extant members of a relict lineage that was most diverse and widespread 34–75 million years ago….Based on 210 sightings of Chinese paddlefish during the period 1981–2003, we estimated the timing of extinction to be by 2005, and no later than by 2010.”

Paddlefish is one of the largest freshwater fish species, and was therefore given the nickname “king of freshwater fish” by the Chinese people. China’s first-generation modern biologist Bing Zhi reported in one of his scientific writings that a fisherman caught a giant paddlefish, which measured 7 meters (23 feet) long, in the 1950s.

Unfortunately, in Bing’s publication, typical of old time literature in China, there was no photographic evidence to confirm the claim.

A more reliable record, widely used today, is from a paddlefish caught on Jan. 8, 2007 in Hubei Province in the Yangtze River that measured 3.6 meters (11.8 feet) long and weighed 250 kilograms (551 pounds).

Dams May be Responsible

Chinese state media widely reported the extinction of the paddlefish on the first day of 2020, and attributed it to overfishing, river transportation, and pollution.

However, a couple of outspoken scientists and a Chinese fishermen previously stated that the two dams on the Yangtze River, Three Gorges Dam and Gezhouba Dam, are likely the number one factor in the rapid decline of fish populations and the extinction of certain species in the river.

Building of the Gezhouba Dam started in January 1981 and ended on December 10, 1988. The construction of the Three Gorges Dam began in December 1994, and filling of the reservoirs began in June 2003.

These dams are considered political achievements—criticizing them would be viewed as criticizing the Chinese leaders who initiated the projects.

Xiao Hui, chief scientist at the Chinese Sturgeon Research Institute (the sturgeon is closely related to the paddlefish), told Shanghai-based Oriental Morning Post in March 2013 that during the initial construction stage of the Gezhouba Dam, the paddlefish were still common. Fishermen easily netted several of them in one catch.

“However, we have not seen a single paddlefish since 2003. That means we can’t even help save them using artificial breeding,” Xiao said.

Fisherman Yang Jianglong described the shocking scene he observed several months after the damming of Gezhouba Dam was completed.

He saw groups of large fish gathered in front of the dam—most of them weighing 700-800 pounds, some exceeding 1,000 pounds—trying hard to swim upstream, despite the rushing torrent pushing them away. Many rammed into the concrete wall and were bleeding all over, while some were tragically killed inside the spinning motor blades.

“It was a mind-boggling scene that I will never forget,” Yang told Oriental Morning Post.

According to Yang, most of these giant fish were sturgeon and paddlefish. Both are migratory fish that need to swim upstream to lay their eggs.

Several years later, local fishermen noticed these fish searching for new hatching sites downstream of the dam. It was during this time that the number of these precious species dropped drastically. Very soon, the sturgeon and paddlefish were both rated as endangered.

A comprehensive ecological and environmental report on the Three Gorges Dam Project indicates that in the Wanzhou river section, the epicenter, the catch in 2004 was 107 tons of fish, a 68 percent drop from that of 2002, before the reservoirs were filled.

Chinese aquaculture scientists pointed out that China’s four major domestic fish: black carp, grass carp, silver carp, and bighead carp, all need the stimulation of rising water to lay eggs. Before the Three Gorges Dam was erected, there were frequent water risings in their natural settings in May and June, their peak breeding season. The balanced water level provided by the dam may be why these fish species are laying drastically fewer eggs than before.

Data from China’s fishery supervision office revealed that the number of juvenile fish of these four major domestic species has decreased by more than 90 percent compared with that of the 1950s. While the highest number of eggs laid on record was 120 billion, the current number is less than 1 billion.

According to Oriental Morning Post, fishermen operating near the Three Gorges Dam had to give up this endeavor shortly after the dam started operation, as all catches found in the net were juvenile fish and shrimps.

“We should not be called fishermen anymore,” one fisherman said. “Instead, we should be called shrimpmen.”