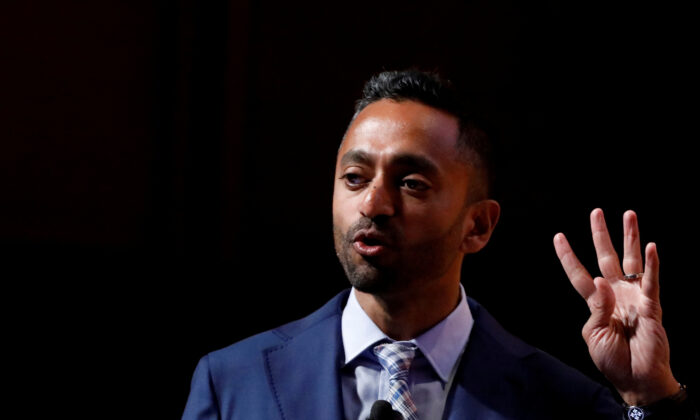 Chamath Palihapitiya, founder and CEO of Social Capital, speaks during the Sohn Investment Conference in New York on May 8, 2017. (Brendan McDermid/Reuters)
Economy

Palihapitiya to Wind Down 2 SPACs as Choppy Markets Drag Valuations

Prolific SPAC investor Chamath Palihapitiya is winding down two of his blank-check firms after failing to find suitable merger targets within deadline, as choppy markets dampen investor sentiment for the once high-flying acquisition vehicles.

The two shell companies will not be able to close deals by Oct. 14, after which they will shut down, according to regulatory filings. SPACs typically have up to two years from the time they list their shares to close a merger.

The firms went public in October 2020 and raised $460 million and $1.15 billion, respectively, which they intended to invest in businesses in the technology sector.

“Over the past two years, we evaluated more than 100 targets and while we came close to doing a deal several times, we ultimately walked away each time,” Palihapitiya said.

In the past, Palihapitiya’s SPACs have merged with a range of companies including space tourism firm Virgin Galactic Holdings Inc. and online lending startup SoFi Technologies Inc.

The investment vehicles rake in hefty returns for their sponsors, who typically collect a fifth of a SPAC’s stock after it clinches a merger.

The lucrative prize, known as “promote,” is in exchange for bearing the cost of getting the shell company to the point of an IPO. But the practice has been criticized by some investors and lawmakers.

Stubbornly high inflation, the Federal Reserve’s rate hikes, and regulatory crackdown has also sapped the appetite for SPACs. BuzzFeed Inc and Grab Holdings Ltd, some of the most high-profile companies that merged with SPACs, have lost over 50 percent of their market value so far this year.

Others like business magazine Forbes and online ticketing company SeatGeek have scrapped their SPAC mergers.

Billionaire investor William Ackman, who raised $4 billion in the biggest-ever SPAC, also told investors in July he would be returning the sum after failing to find a suitable target.

By Mehnaz Yasmin and Niket Nishant