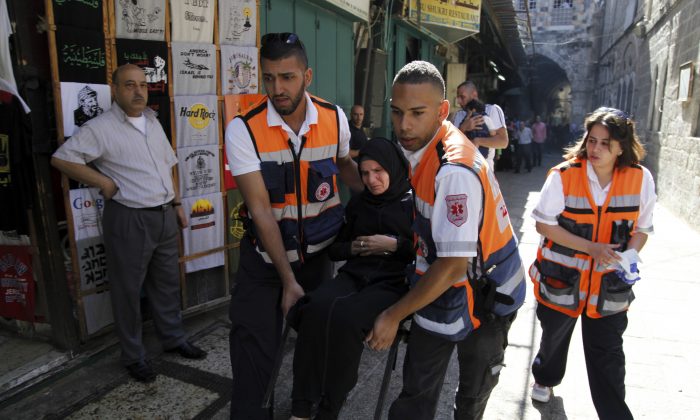 JERUSALEM—A Palestinian fatally stabbed two Israelis as they walked in Jerusalem’s Old City and seriously injured a toddler and a woman, before he was shot and killed by an officer on duty, police said Saturday in the latest in a series of Palestinian attacks.

Jerusalem police chief Moshe Edri said the Palestinian “stabbed an Israeli man, his wife and the toddler” multiple times in an alleyway before stabbing another man.

Both Israeli men succumbed to their wounds, he said, adding that the mother and the toddler are in serious condition.

Police Spokeswoman Luba Samri said the Palestinian attacker took a gun from one of the wounded men and opened fire at police and tourists.

The Palestinian attacker was then shot and killed by an Israeli police officer who rushed to the scene. Police later identified him as 19-year-old from Al Bireh, near Ramallah.

Hamas, the Islamic militant group that rules Gaza, issued a statement praising the attack which it called, “heroic.”

It was the latest in a series of deadly Palestinian attacks against Israeli civilians.

On Thursday, suspected Palestinian gunmen killed an Israeli couple in front of their children as they drove in the West Bank.

Multiple shots killed Eitam and Naama Henkin, residents of the Jewish West Bank settlement of Neria. Their four young children, including a four-month-old infant, were in the back seat of the car during the shooting but were unharmed.

Hamas welcomed that attack as well, but no Palestinian group immediately claimed responsibility for it. Palestinian President Mahmoud Abbas has not commented on the latest attacks.

Israel forces were later deployed in the West Bank hunting for the gunmen.

The Palestinian Red Crescent said earlier that eight people were wounded by gunfire early Saturday in the northern town of Nablus. A Palestinian security official said seven members of the Islamic militant group Hamas were arrested. The official spoke on condition of anonymity because he was not authorized to brief reporters.

The Israel military said troops operated in the area but would not elaborate further.

Tensions have flared between Israelis and Palestinians in recent weeks, with much of the unrest focused on Jerusalem’s most sensitive holy site, known to Jews as the Temple Mount and to Muslims as the Noble Sanctuary, site of the Al-Aqsa mosque.

The hilltop compound in Jerusalem’s Old City is a frequent flashpoint and its fate is a core issue at the heart of the Israeli-Palestinian conflict. It is known to Jews as the Temple Mount, site of the two biblical Jewish temples. Muslims revere it as the Noble Sanctuary, where they believe the Prophet Muhammad ascended to heaven.

Non-Muslim visitors are only allowed to enter the site at specific hours and are banned by police from praying there. Many Muslims view these visits as a provocation and accuse Jewish extremists of plotting to take over the site.

Israel has promised to ensure the delicate arrangement at the site and insists it will not allow the status quo there to be changed.

Abbas Says Palestinians No Longer Bound by Pacts With Israel

But Palestinians say that in the last two months, there has been a new development where Israel has intermittently restricted some Muslims from the compound when Jews visit. Israel says this is to reduce friction, but Palestinians claim that Israel intends to establish Muslim-free Jewish visiting hours. The site is so sensitive that even rumors are enough to trigger violence there.

Israel has blamed Palestinian leaders for incitement. There have been several days of clashes at the site over the past few weeks as Muslim protesters barricaded themselves inside the mosque while hurling stones and fireworks at police. The unrest spread to Arab neighborhoods of east Jerusalem, where Palestinian protesters hurled stones at police and Israeli cars.

An Israeli died when Palestinians pelted his car with rocks and several others were injured in other incidents. Dozens of Palestinians were wounded in clashes with Israeli forces in violence that followed the Jerusalem unrest then. Israel responded last week by approving harsher measures that would loosen the rules of engagement for police to respond to stone throwers.

Israel captured the eastern part of Jerusalem, where the site is located, along with the West Bank in the 1967 war from Jordan, territory the Palestinians claim for their future state.