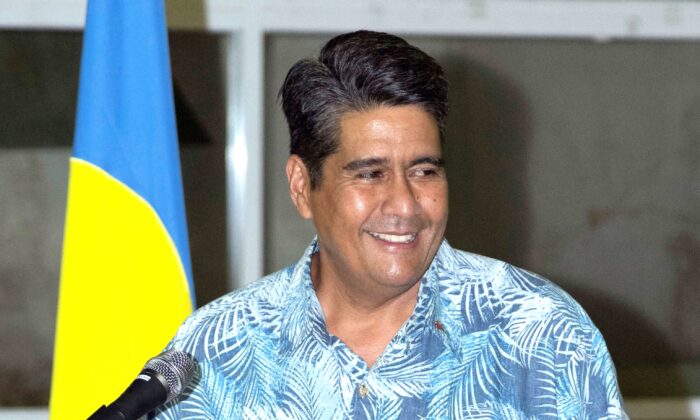 Palau President Surangel Whipps speaks as he greets tourists from Taiwan during their arrival in Koror after Taiwan and Palau launched a rare holiday travel bubble as the two diplomatic allies try to kickstart their battered tourist industries after successfully keeping COVID-19 infections at bay on April 1, 2021. (Richard W. Brooks/AFP via Getty Images)
Taiwan

Palau’s president vowed on Sept. 11 that the Pacific nation will maintain diplomatic ties with Taiwan despite growing concerns over attempts by the Beijing regime and the Kremlin to change the international status quo.

President Surangel Whipps Jr. stated concern during an interview that China’s military drills near Taiwan and Russia’s aggression against Ukraine will destabilize the Pacific, The Pacific Advocate reported.

“What we all want is to reduce the escalation of activities and maintain the status quo. I hope that the escalations will stop, and that we can continue with the peace and security that we had before,” he said.

Whipps believes that China’s aggressive posturing, which has led many Pacific nations to placate Beijing by severing ties with Taiwan in recent years, may have exacerbated regional tensions. But he noted that Palau will maintain its strong ties with the self-ruled democratic Taiwan.

“We value that relationship. It’s a very strong and healthy relationship, and Taiwan has been a good partner. We want to continue to work with them,” he said.

“I know, over the past few years, we have seen many countries that used to recognize the Republic of China, Taiwan, have switched sides. And I think, because of that, more tension has been created and it makes the region more unstable.”

Whipps made the remarks following a meeting with Japanese Prime Minister Fumio Kishida on Sept. 9, when they affirmed their close cooperation and commitment to a free and open Indo-Pacific.

Both sides underscored the importance of peace and security in the Taiwan Strait and oppose unilateral attempts to change the status quo in the Indo-Pacific region, according to Japan’s Foreign Affairs Ministry.

Palau is a democratic republic that has long maintained stronger ties with Taiwan than with the Chinese communist regime.

Aside from Palau, only three other Pacific island nations—the Marshall Islands, Nauru, and Tuvalu—still recognize Taiwan as a sovereign nation. The Solomon Islands and Kiribati switched allegiance to China in 2019.

Tuvalu Prime Minister Kausea Natano pledged on Sept. 5 that his government would “stand firm in [its] commitment to remain a lasting and loyal ally” to Taiwan.

China views Taiwan as a renegade province that must be reunited with the mainland. The Chinese communist regime began its military drills near Taiwan in August following House Speaker Nancy Pelosi’s visit to the island.

The Chinese regime has been attempting to tighten alliances with the Pacific island nations but failed to get 10 Pacific nations to sign on to its sweeping security and economic deal due to a lack of consensus from all Pacific nations.

The Solomon Islands signed a security deal with Beijing in April, which other nations feared would allow China to establish a military base 1,000 miles off the Australian coast and rapidly destabilize the region.