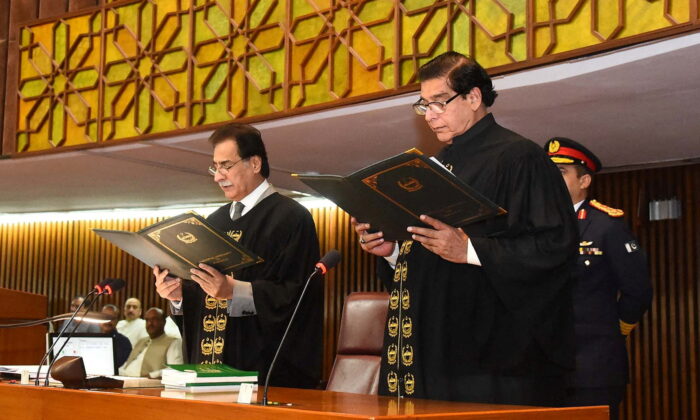 Raja Pervaiz Ashraf (R), a former prime minister who belongs to the Pakistan Peoples Party (PPP) which is part of the new ruling alliance, takes oath as the 22nd Speaker of the National Assembly of Pakistan from Ayaz Sadiq, a member of the panel of the chairman, at the Parliament House in Islamabad, Pakistan, on April 16, 2022. (Press Information Department/Handout via Reuters)
Asia & Pacific

ISLAMABAD, Pakistan—Pakistan’s new ruling alliance took control of the lower house of parliament on Saturday with the election of a new speaker, cementing control of the assembly after former premier Imran Khan was ousted in a no-confidence vote.

The previous speaker and his deputy, both Khan allies, had attempted to block and then delay the vote, only for the country’s top court to deem their actions illegal.

The lower house of parliament eventually voted in favor of removing Khan from office on April 10.

The new ruling alliance has already elected their candidate, Shehbaz Sharif as the new prime minister.

The new speaker is Raja Pervaiz Ashraf, a former prime minister who belongs to the Pakistan Peoples Party (PPP), part of the new ruling alliance. He was elected unopposed in the absence of Khan’s party, which resigned en masse from the house on April 11.

The resignations are yet to be fully processed. If accepted, Pakistan faces the prospect of close to 100 by-elections within two months, a major distraction for Sharif and his coalition partners and a potential platform for Khan to mobilize support.

Sharif is expected to name his cabinet in the coming days with a number of policy challenges facing the new government, in particular dealing with an economy in deep trouble.