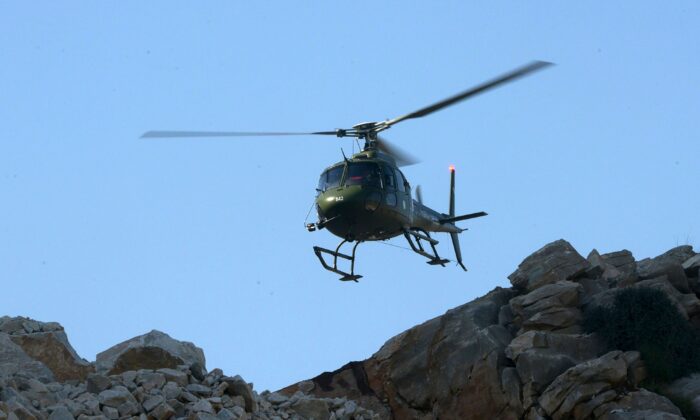 A Frontier Corps helicopter takes part in a rescue search for miners after a rockslide at a marble mine in the mountainous Mohmand district in Khyber-Pakhtunkhwa province on Sept. 8, 2020. (Abdul Majeed/AFP via Getty Images)
Asia & Pacific

A military helicopter with an army general and five others went missing on Monday during a flood relief operation in southern Pakistan, the army said.

The army aviation helicopter, which was helping with the flood relief operations in Lasbela district in southern Balochistan province has lost contact with air traffic control, the army said in a statement.

It said six people, including a the army general, who commands southern 12 Corps were on board the chopper. A search operation was under way, it said.

The military didn’t say how long the helicopter had been missing or what was its make.

Southern Pakistan has been hit hard by floods after unusual monsoon rains that have killed scores of people and swept away hundreds of houses, according to the country’s disaster management agency.