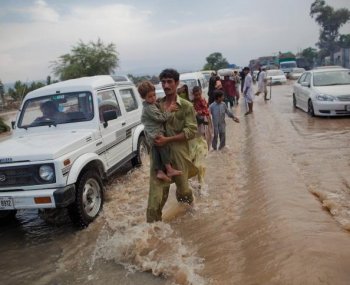 In Khyber Pakhtunkhw, the worst hit area, over 100 people are missing, 567 houses were destroyed, and 90 highways and 58 major thoroughfares have been closed, according to GEO.

At least 1.5 million people in the country have been affected by the flood waters caused by heavy monsoon rains.

In the district of Swat, eight hotels and over 300 houses have been destroyed, according to GEO

The government of the Pakistani province of Punjab decided to cut salaries from certain government workers for up to two days in order to raise funds to handle the disaster.

The United States has announced it will send $10 million in relief aid, including 50,000 halal meals, two water filters, and four inflatable rescue boats.

"[We] Will work closely with the government of Pakistan to ensure aid reaches those people who need it most. I have seen firsthand the strength and resilience of the Pakistani people and I know they will come through this tragedy with determination and compassion," said U.S. Secretary of State Hillary Clinton in a statement released on Sunday.