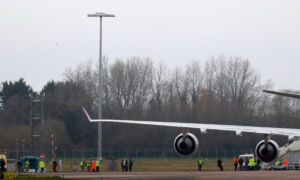 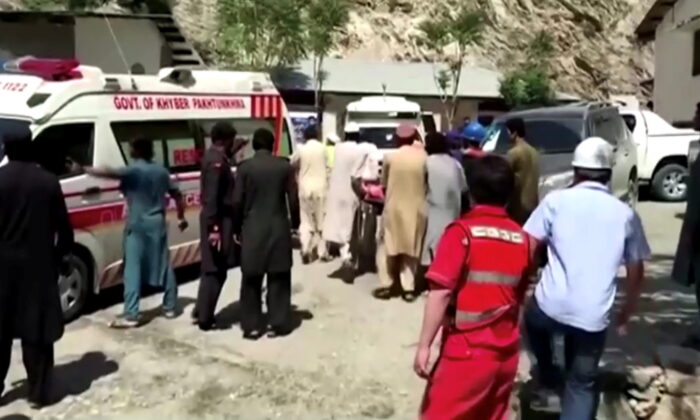 People wheel a gurney toward an ambulance outside a hospital in Dasu, Pakistan, after a bus with Chinese nationals on board plunged into a ravine in Upper Kohistan following a blast on July 14, 2021, in this still image taken from video. (Reuters/Reuters Tv)
International Relations

An explosion on a bus killed 13 people in northern Pakistan on July 14, including nine Chinese nationals, in what Beijing says was a bomb attack but Islamabad is calling a vehicle failure.

Two Pakistani soldiers also were among the dead after the explosion sent the bus into a ravine, local government and police sources told Reuters.

Chinese engineers and Pakistani construction workers have been working on hydroelectric projects for several years as part of Beijing’s Belt and Road Initiative in the western province of Khyber-Pakhtunkhwa, where the blast occurred.

China’s embassy in Pakistan confirmed that nine of its nationals died in the incident. Terming the explosion a bomb attack without offering more details, the Chinese foreign ministry offered condolences and urged both a thorough investigation and protection of its personnel and projects.

Pakistan’s foreign ministry said a mechanical failure caused a gas leak, which led to the explosion.

A senior administrative officer of the Hazara region, who asked not to be identified, said the bus was carrying more than 30 Chinese engineers to the Dasu dam in Upper Kohistan.

The Dasu hydroelectric project is part of the China-Pakistan Economic Corridor (CPEC), a $65 billion investment plan aiming to link western China to the southern Pakistani port of Gwadar.

“This is clearly an act of terrorism that has been carefully planned and was supported by information,” reads an editorial in Global Times, a Chinese tabloid run by the ruling Communist Party’s official People’s Daily, calling the incident the most serious attack on Chinese nationals in recent years.

Chinese nationals working in Pakistan have been attacked previously, particularly in the southwestern province of Balochistan, where separatist militants have waged an insurgency against authorities in a state where China has developed mines and a port.

The separatists have also attacked the Chinese consulate in the southern city of Karachi. Islamist militants have previously targeted Chinese nationals as well.

Using an air ambulance, rescuers took the injured, including the Chinese engineers, to a hospital in Dasu, about 10 km (6 miles) from the blast site, authorities said.

“Police and the bomb disposal squad are at the site,” regional official Arif Khan Yousufzai said outside the hospital, noting that an investigation would take place to ascertain details.

Pakistan’s foreign ministry said it was in close contact with the Chinese embassy in Islamabad, noting in a statement: “Pakistan attaches great importance to the safety and security of Chinese nationals, projects, and institutions.”