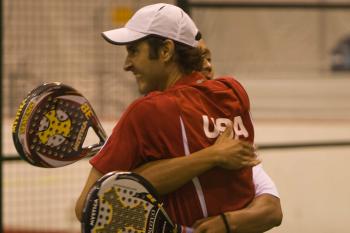 Head Referee Nayra Ramirez is called in by Team USA and Team Portugal’s captains to make a decision on the second match point dispute. Ramirez ruled that the point would be played again. (Neil Campbell/The Epoch Times)
News

Neil Campbell
View profile
Follow
biggersmaller
Print
CALGARY—Court 3 at the Calgary Soccer Centre was host to the most exciting match of the evening as Team USA faced off against Portugal in the final match of the round robin stage of the men’s match play event Tuesday evening.

The match was a cliffhanger that drew an audience not only of spectators but every member of Team USA and Team Portgual’s men’s and women’s squads.

“The first match, the other team played extremely well and beat our team in 2 sets which set the tempo because we had to win the next two. We were confident of it because we have strong lines,” said Mike May of Team USA.

The second match, which faced off Team USA’s “Bailey Brothers,” Pablo and Ricardo Bailey against Pedro Sousa and Diogo Lanca, had a tense first set with USA winning 7-6. They took the next set 6-3 to tie the match at one all.

May noted that the first set in match 2 was likely the decisive one, “But in the second match it was 7-6 in the first set, so if we lost that set it could have swung in another direction and the match could have been over. “

The audience was pumped for match 3 which put both teams’ number one lines against each other. The cheering was intense for nearly every single point as Team USA waved flags and spun red, white and blue banners to encourage their team. Portugal followed suit by screaming “Vamos!” and the women’s team draped themselves in the Portuguese flag.

In the second set, Team USA made it to match point first and after May drove the ball down the line close to the sidewall, the Portuguese team protested that it hit the wall first. Many in the audience felt that the ball was in, but the teams agreed to play the point again to settle the dispute.

“When there’s a conflict, if a referee is not there to award one way or the other then the call is to start the point over. They didn’t agree with that, but that’s the standard rules and regulations so it’s what was applied,” said Francisco Turner, Team USA’s Captain, after the match.

May also commented on the incident. “I’m not going to say the guy cheated, he may not have seen it, it was on the fence. But it was a bad call.”

USA once again arrived at Match point first but another protest broke out as the Portuguese men claimed that May had hit the net with his paddle on the point. Chaos ensued as the teams argued amongst each other and both team captains met with each other and called in the referee.

“When there’s too much tension for one team or another to call it, I made a request to the other captain to call in the referee and that’s when she came in,” said Turner.

The referee determined that it was unclear and ordered the match point played again. Team USA won it cleanly the third time and won the match by a score of 6-2, 6-4.

Turner remarked that some of the tension originated from a match USA had played earlier against the Portuguese duo in the men’s open.
“The situation stemmed from a prior match that we faced against these same two players in the open side. So unfortunately that was a little bit of the tension that had arisen from the other match. The players knew each other, and it’s tough to battle the same group twice especially given the fact they had lost the other time.”

May said, “If I had touched the net I would have told them I touched the net, that’s the kind of sportsmen we are…. The other team mates came over and apologized for their player’s behaviour, it was uncalled for.”

Turner recalled that the two teams had faced off in the 2006 World Championships where USA beat Portugal 3-0, adding that they developed their line matchup based on that confrontation.

"We also faced them in 2006 but unfortunately lost to them. So for us, this is a big deal. We would like to vie for 5th or 6th place and to do that we have to get past Mexico,” he said.

The U.S. men’s squad will play Mexico Tuesday night in bracket 2 of the men’s match play where four teams will vie for 5-8th place.
May said the team is looking forward, but knows the road ahead may be rocky.

“From here on out, there’s definitely only tough matches. There will not be any easy matches. We look forward to playing some good paddle.”