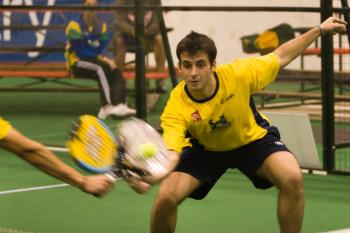 In the men’s open,  Spain’s seemingly unstoppable team of David Losada and Juan Jose Mieres beat out countrymen Jordi Munoz and Francisco Navarro by a score of 6-1, 6-2. On the other court, Brazil’s Gervasio Del Bono and Julio Julianoti beat out Argentina’s Rodrigo Ovide and Fernando Cavalleri in a tough match by a score of 6-4, 6-4.

“I think we got this far and had a really good time, it was a really hard match against Argentina. In the last World Championship we faced this same matchup in the semi-finals.”

On their upcoming match against Spain’s Losada and Mieres, Brazil’s Julianoti said, “It’s going to be hard for us, Spain is well prepared. They beat us in the finals in the last World Championship and we hope to reverse that result.”

Del Bono commented on just how tough their match against Argentina’s squad was.

“We’re very happy to be in the finals for the first time. Our match against Argentina was a really hard game with a lot of pressure. We’ve played them once before and we won. It was really hard but we played well.”

Julianoti added, “It was a very psychological game, more than it was physical. We had to think about things a lot more.”

Spain’s David Losada said the duo was happy to return to the finals of a World Championship.

“It’s really incredible, we’re really happy to be at the finals. It’s been two years since we’ve been at a World Championship and we’re happy to be back.”

On the women’s side, Spain’s Maria Wakonigg and Ana Fernandez also beat out their countrywomen Almunda Marchena and Marta Ruiz by a score of 6-0, 6-4.

Meanwhile the third Spanish team in the women’s semi-finals, Eva Gayoso and Patricia Llaguno beat out an Argentinian/Spanish combo of Melissa Capra and Begona Garralda in a tough match by a score of 1-6, 7-6, 6-0.

“It was a very good match. In the end we won, they started off playing much better than us until we got settled. Then we were able to come back and win the match,” said Gayoso.

On Friday the Women’s Open final will feature an all-Spain battle as Maria Wakonigg and Ana Fernandez will face Eva Gayoso and Patricia Llaguno. It is not the first time the two have played each other in a championship match.

“It’s a big match, especially since we also played this game in the final of the Spanish Championships this year two or three months ago. They are a tough team. It was really hard, we won 7-6, 7-6 in two tie breaks,” said Llaguno.

For the men’s teams, Brazil and Spain faced off and the two opening lines were a prelude for Friday’s men’s open finals as Spain’s Losada and Mieres were paired up against Brazil’s Del Bono and Julianoti in an exciting and close match that drew the interest of everyone in the Calgary West Soccer Center.

On the women’s side, the Finals were decided as Argentina’s squad rolled over France in a very decisive 3-0 victory. The French women were never able to score more than 2 points against Argentina.

Spain also defeated Brazil on the Women’s side by a score of 3-0.

On Saturday, the Finals will showcase Spain against Argentina in both the men’s and women’s match play events.

The Canadian women defeated Team USA’s women’s team by a score of 3-0 and the Canadian men lost a very close and tough match against Italy in the battle for 9th place. Eric Watson and Danny Shannon narrow lost to Italy’s Matteo Mungardi and Alessandro Testone by a score of 5-7, 6-4, 6-4 in the first match.