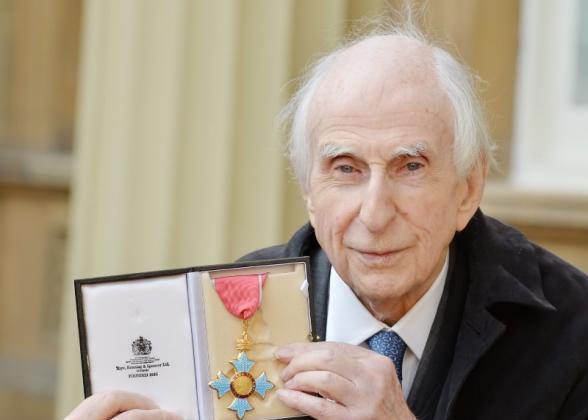 Michael Bond, who created Paddington Bear, holds his Commander of the Order of the British Empire (CBE) after it was presented to him by Prince William at an Investiture ceremony at Buckingham Palace in central London on October 27, 2015. (REUTERS/John Stillwell/Pool)
Entertainment

The creator of Paddington Bear, a marmalade-loving refugee from Peru who entertained generations of children with his exploits in London, died on Tuesday aged 91.

Michael Bond, who named his bear after the London railway station where Paddington arrived, died following a short illness, his publisher HarperCollins said.

Wearing a tag on his coat that read “Please look after this bear”, Paddington came from “deepest, darkest Peru” in Bond’s 1958 story “A Bear called Paddington”.

Bond said the inspiration for the character came when he spotted a teddy bear in his flat, and wondered what would happen if a real bear landed at Paddington Station.

“Paddington is very real to me,” he said.

The bear was taken in by the Brown family and his adventures and mishaps in England were detailed in more than 20 books, the last of which, “Paddington’s Finest Hour”, was published in April.

Ann-Janine Murtagh, executive publisher at HarperCollins children’s books, said Bond was a true gentleman and the most enchanting of writers.

“He will be forever remembered for his creation of the iconic Paddington, with his duffle coat and wellington boots, which touched my own heart as a child and will live on in the hearts of future generations,” she said on Wednesday.

Bond’s books have been enjoyed by generations of children, with more than 35 million sold, the publisher said.

A TV series was made in the 1970s, and “Paddington”, a film based on the character, was released in 2014 to critical and commercial success. A sequel is due to be realized later this year.