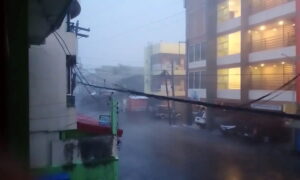 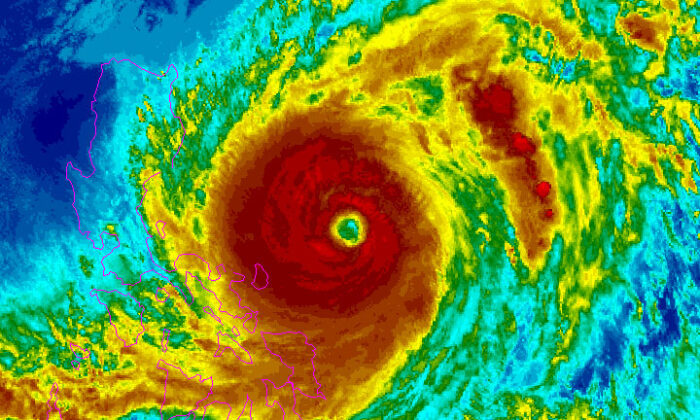 A satellite image of the typhoon Surigae near the Philippines on April 19, 2021. (NOAA/Handout via Reuters)
Asia & Pacific

MANILA—Strong winds and high waves lashed the eastern Philippines on Monday as a strong typhoon barrelled past in the Pacific Ocean, killing one man and triggering flooding in lower-lying communities, disaster officials said.

The national weather bureau issued a severe wind and heavy rainfall warning on Monday, saying “destructive typhoon-force winds extend outward up to 110 km (68.35 miles) from the centre of the storm.”

More than 100,000 people were evacuated from coastal areas, according to provincial disaster agencies.

The core of Surigae, or Bising as the storm is known locally, is not expected to hit land. But with a diameter of 500 km and winds reaching 195 km per hour, parts of the eastern islands of Samar experienced flooding, while several communities lost power.

The first super typhoon of 2021 foreshadows a busy storm season for the region in the year ahead, experts say.

“Early indications are that the 2021 typhoon season will be at least average in activity, and possibly above average,” U.S. meteorologist Jeff Masters wrote in a post on Yale Climate Connections’ website, which reports daily on climate conditions.

Atmospheric scientists say data shows that storms, called typhoons, cyclones, or hurricanes in different parts of the world, are getting stronger because of warmer oceans.

“The fuel for these storms is warm oceans,” said Anne-Claire Fontan, a scientific officer at the World Meteorological Organization based in Geneva.

A warmer atmosphere holds more moisture, allowing gale-force winds to dump more rain. In particular, water temperature in the western Pacific Ocean is higher than the global average, making it fertile ground for mega-storms like Surigae. The region sees more storms than any other part of the world, more than 70 percent of which develop at the peak of the season between July and October.

Disaster officials said a 79-year old man from Southern Leyte province in the Philippines was confirmed dead after he was hit by a fallen tree and one person was missing.

The Philippines sees around 20 tropical storms annually. Last year, the strongest typhoon of the year, Goni, hit the country with gusts of up to 310 km per hour, killing 25 people and forcing the evacuation of more than 345,000.

Taiwan, meanwhile, is hoping the storm brings much-needed rain to alleviate drought, with people taking to social media to welcome it. However, it is expected to veer away from Taiwan out into the Pacific, bringing rain only to the northern part of the island later this week.

By Kanupriya Kapoor and Karen Lema