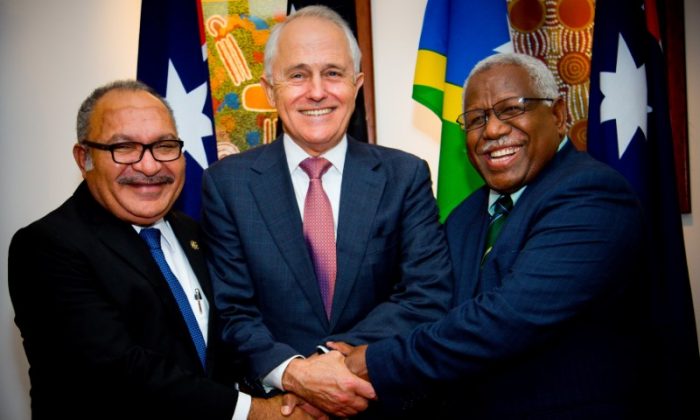 SYDNEY—Pacific nations Papua New Guinea and the Solomon Islands have signed on to a joint undersea internet cable project, funded mostly by Australia, that forestalls plans by Chinese telecoms giant Huawei to lay the links itself.

The pact signed on July 11 comes as China pushes for influence in a region Australia views as its backyard, amid souring ties after Prime Minister Malcolm Turnbull accused Beijing of meddling in the country’s affairs last year.

Australia will pay two-thirds of the project cost, totaling A$136.6 million ($100 million), under the deal, signed during a visit to Brisbane by Solomon Islands Prime Minister Rick Houenipwela and Papua New Guinea Prime Minister Peter O’Neill.

“We spend billions of dollars a year on foreign aid and this is a very practical way of investing in the future economic growth of our neighbors in the Pacific,” Turnbull told reporters about the deal.

The project, for which Australian telecom firm Vocus Group is building the cable, will link the two nations to the Australian mainland, besides connecting the Solomons capital Honiara with the archipelago’s outer islands.

For years, Western intelligence agencies have worried over Huawei’s ties to the Chinese regime and the possibility that its equipment could be used for espionage.

Huawei has already been mostly shut out of the giant U.S. market over national security concerns. Its business serving small, rural telecoms operators is now at risk after U.S. lawmakers raised concerns during a Congressional hearing in June.

Australia, which is poised to ban Huawei from its domestic 5G mobile network on the advice of its intelligence services, has similarly scrapped a Huawei offer for cabling to the Solomons over national security risks.

The country’s 5G service will require a dense network of towers that would then be leased to local mobile providers such as telecoms firm Telstra.

Australia’s intelligence agencies fear that if mobile operators rely on Huawei’s equipment, the Chinese company could develop a means of collecting data or even undermine the stability of the network. Chinese law requires organizations and citizens to support, assist, and cooperate with Beijing’s intelligence work if asked.

By Tom Westbrook and Colin Packham.