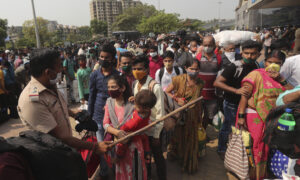 A patient wearing an oxygen mask is wheeled inside a COVID-19 hospital for treatment in Ahmedabad, India, on April 21, 2021. (Amit Dave/Reuters)
World

SATARA, India—At least 24 COVID-19 patients in western India died on Wednesday when the oxygen supply to their ventilators ran out, amid a nationwide shortage of the gas and a surge in infections.

Maharashtra State Health Minister Rajesh Tope confirmed the deaths at a hospital in Nashik city and said the hospital’s oxygen supply ran out because a tanker refilling it suffered a leak. Oxygen was running scarce throughout the country.

“The leakage was spotted at the tank supplying oxygen for these patients. The interrupted supply could be linked to the deaths of the patients in the hospital,” Tope said.

Hospitals in Delhi, the capital, and elsewhere have warned that their supplies of medical oxygen given to severely ill COVID-19 patients are running low.

Max Healthcare, the largest private sector healthcare provider in Delhi and its suburbs, said some of its hospitals had barely two hours’ supply of oxygen.

Television showed images of people with empty oxygen cylinders crowding refilling facilities in the most populous state of Uttar Pradesh, as they scrambled to save stricken relatives in hospital.

The situation was so severe that some people tried to loot an oxygen tanker, forcing authorities to beef up security, according to the health minister of the northern state of Haryana.

India now faces a coronavirus “storm” overwhelming its health system, Prime Minister Narendra Modi said in a national address on Tuesday, adding that authorities were working with states and private firms to deliver oxygen with speed.

Authorities in Maharashtra, which is already under partial lockdown, late on Wednesday ordered additional restrictions on the movement of people within the city and state until May 1 to curb the virus spread.

The order said all offices, except those providing essential services, must operate with 15 percent staff. Travel by private vehicles is permitted only for medical emergencies, and only medical workers and government employees may ride the normally popular train system.

India’s 2,023 deaths were also its highest in the pandemic.