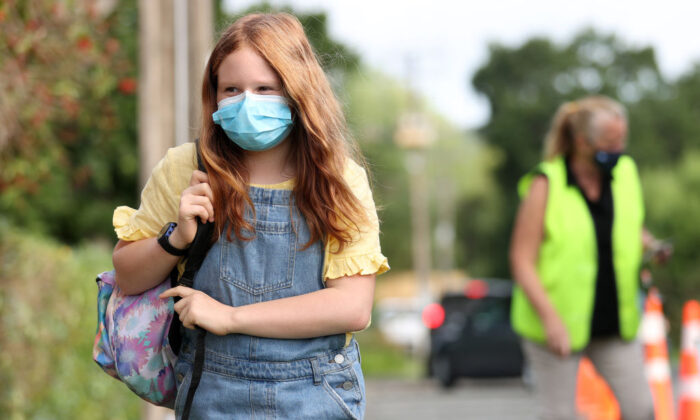 A girl arrives at school as children are welcomed by their principal on their first day at school after lockdowns ended in Auckland, New Zealand, on Nov. 17, 2021. (Fiona Goodall/Getty Images)
Asia & Pacific

Less than half of New Zealand’s students regularly attended class during Term One of the Omicron wave, according to government figures.

The Ministry of Education’s school attendance report for Term One—covering February to April—found 46 percent of students across the country regularly attended school, a 20.4 percentage point drop compared to the same term in 2021 (pdf).

The ministry defines regular attendance as turning up to class 90 percent of the time. The figures represent the worst attendance performance in recent times.

Sean Teddy, the leader of operations and integration in the Ministry of Education, said in an email statement to The Epoch Times that Omicron had resulted in high levels of absences for both students and staff at the beginning of the term. This was followed by a wave of winter illnesses in March.

“In addition to absences due to COVID-19 illness, we saw absences due to parental/family concerns that attendance at school is unsafe because of the risk of contracting COVID-19,” Teddy added, saying the impact of COVID fatigue on parents made school attendance seem less important.

New Zealand has experienced declining school attendance across the board since 2015, a trend accelerated during COVID-19, according to Associate Education Minister Jan Tinetti.

The ministry notes on its website that attendance is important because it is linked to both student wellbeing and attainment.

“Our education insights studies confirm that attending school regularly predicts the best outcomes for wellbeing on average,” it said.

Further, even students who are within the “regular attendance” category, but still record a five to 10 percent absence rate, will obtain less school credits (marks) compared to students with slightly higher attendance.

“There is no ‘safe’ level of non-attendance,” the ministry said.

Regular class attendance figures dramatically fell across all 10 education regions in Term One.

Tai Tokerau, the northernmost education region, recorded the worst regular attendance with 34 percent of students achieving a 90 percent attendance across the Term. This was eight percent lower than the region with the next worst attendance rate, Waikato at 42 percent.

Students in the most urban cities of Auckland (46.5 percent), Wellington (47.4 percent), and Christchurch (49.7 percent) also struggled with attendance.

Attendance rate when separated by ethnicity also dropped across the board, with the greatest fall seen in Asian students, down 25.5 percentage points to just 53.8 percent.

Teddy said the ministry was still in the process of collecting the finalised data for Term Two, however, weekly data has thus far provided a “high level indication” that absences are ongoing.

“But it is too early to draw a conclusion on how the regular attendance rates will be affected,” he said.