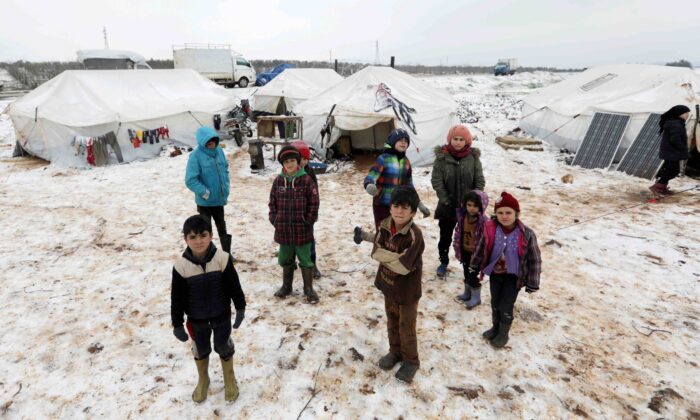 AMMAN—More than 800,000 Syrians, mostly women and children, have fled their homes during a Syrian military campaign backed by Russia to clear Syrian rebels in northwest Syria since Dec. 1, a senior U.N. spokesperson said on Thursday.

The exodus is expected to continue, with thousands of people on the move as whole towns and communities flee to the safety of areas near the Turkish border, David Swanson told Reuters.

The Assad regime’s artillery and Russian jets have pounded towns and villages since early December in a renewed assault backed by Russia and pro-Iranian militias aimed at clearing Syrian opposition forces.

“Residents are fleeing by the thousands in open trucks or by foot; often at night to escape detection despite the bitter cold temperatures,” Swanson, the U.N. regional spokesman for Syria, told Reuters.

U.N. officials say the region is on the brink of a humanitarian catastrophe. Those on the run in Idlib and adjoining Aleppo province are joining close to 400,000 people who fled earlier bouts of fighting to the safety of camps near the Turkish border.

The latest offensive has brought the military campaign closer to heavily populated northern Idlib along the border, where nearly 3 million people are trapped, according to the United Nations.

The confrontations between Ankara and Damascus continue the nine-year-old war in which Russia and Iran have backed Syrian President Bashar al-Assad.