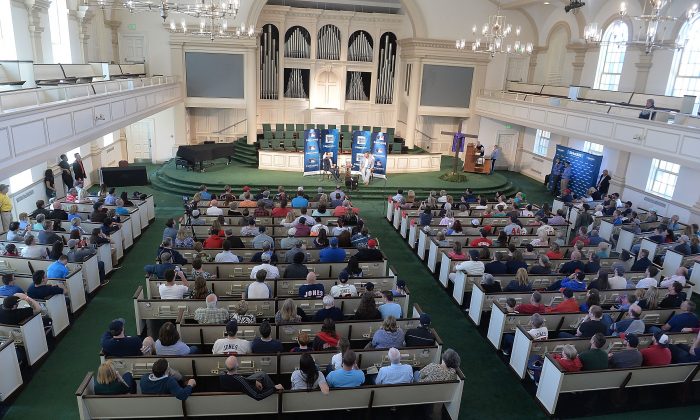 Almost 400 Southern Baptist church leaders and workers over the past 20 years have faced allegations of sexual abuse from more than 700 victims—a joint investigation by two Texas newspapers revealed.

Results of a six-month investigation conducted by The Houston Chronicle and the San Antonio Express-News and published on Feb. 10, found the majority of the 380 clergy accused of sexual misconduct have been convicted or taken plea deals. But it also revealed a number of them had continued to work in the ministry with no punishment.

Of those alleged victims, some were as young as three years old. The allegations —from both males and females—include claims of molestation, repeated rape, being photographed naked, and being exposed to pornography. The cases were spread throughout the United States, but most reportedly occurred in Texas.

The newspapers found that since 1998, at least 10 churches have employed ministers, church volunteers, and employees who had faced sexual misconduct charges; some were even registered sex offenders. In total, about 35 pastors, employees, and volunteers were still employed, even after having been the target of allegations.

Of the total accused, 220 were successfully prosecuted and were either convicted or took plea deals; some cases are pending. Meanwhile, 100 of those who were convicted are still held in prisons, according to state and federal records.

The report from the newspapers has sparked calls for authorities to open the same type of probe of the Southern Baptist community as the numerous ongoing investigations into sexual abuse in the Catholic Church in the United States.

“I do expect there will be more interest from prosecutors,” in Southern Baptists, Marci Hamilton, the chief executive of anti-abuse nonprofit organization CHILD USA, told the Washington Post. “I also think it’s going to create added pressure in the Southern states for statute of limitation reform.”

The United States is facing a renewed, growing reckoning as nearly two dozen local, state, or federal investigations, either criminal or civil, have been launched into the Roman Catholic Church over child sexual abuse allegations. Over half of the 187 Roman Catholic dioceses across the country have also started investigating these claims or have announced plans to do so.

Laura Ahearn, a New York attorney in private practice who has represented clergy abuse victims, told The Epoch Times previously that she was “deeply disturbed” by cover-up tactics she witnessed.

“There were priests that were stationed here (in the United States) and after they were accused of molesting children here, they were sent to another country by the church. They would send the priest to so-called treatment and often those priests would just re-offend and molest more children,” she said.

Southern Baptist Convention President J.D. Greear suggested Feb. 11 that the 700 victims were just the tip of the iceberg.

“What can easily be lost in the size of these numbers, which are grievously large, is the tragic fact that they cannot be the whole story,” he said in a blog post.

“If you have been victimized by a church leader (or anyone else for that matter) and the Houston Chronicle story rekindled fear and doubt about how you could receive care, please hear us: we are profoundly sorry,” he said. “We, the church, have failed you, but we do not want you to forgo care or counsel.”

Several past presidents and prominent Southern Baptist Convention leaders have been accused by victims of concealing or mishandling abuse complaints within their churches or seminaries, the newspapers reported.

In 2008, a victim implored SBC leaders to track sexual predators, act against congregations that harbored or concealed abusers, and establish sexual abuse prevention policies such as those adopted by other faiths, including the Roman Catholic Church. But the SBC Executive Committee rejected the proposals.

The committee’s interim president, August Boto, who drafted that rejection document, expressed “sorrow” on Feb. 10 about the newspapers’ findings.

“It would be sorrow if it were 200 or 600 [cases]. Sorrow. What we’re talking about is criminal. The fact that criminal activity occurs in a church context is always the basis of grief. But it’s going to happen. And that statement (he drafted in 2008) does not mean that we must be resigned to it,” he told the newspapers.

Greear, who was elected as the SBC’s president last June, said the abuses described in the news report “are pure evil.”

In recent years, several abuse survivors and their supporters have campaigned on the issue of sexual abuse within the SBC community. Activists remain skeptical as to whether an SBC Executive Committee study created last July will recommend sufficiently tough anti-abuse measures.