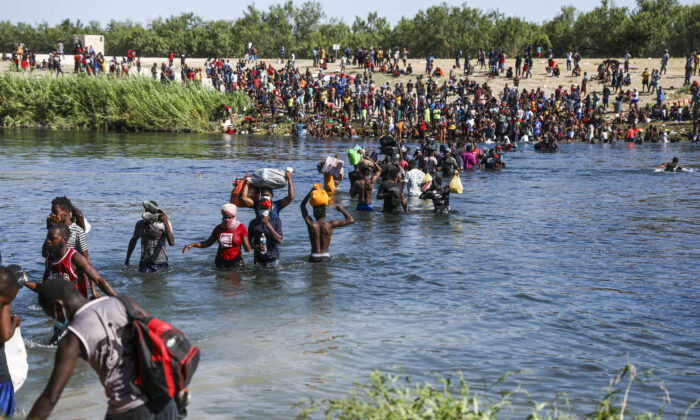 Illegal immigrants take supplies back and forth between Acuña, Mexico, and the United States (far side) across the Rio Grande, the international boundary with Mexico, in Acuña, Mexico, on Sept. 20, 2021. (Charlotte Cuthbertson/The Epoch Times)
By Naveen Athrappully

On Dec. 8 at around 3:20 a.m., 704 illegal immigrants crossed the Rio Grande River near a local ranch at Eagle Pass, according to a CBP press release. A gathering of over 100 individuals is categorized as a large group by the agency. Agents arrived at the scene and soon apprehended the immigrants for illegally entering the United States.

The group consisted of 320 single males, 190 single females, 74 family units, and 12 unaccompanied children. There were 535 Cubans, 74 Nicaraguans, 49 Colombians, 31 Dominicans, nine Peruvians, and three each from Ecuador and Mexico.

“All subjects were transported to the nearest processing center and processed in accordance with U.S. Customs and Border Protection policies,” CBP said. “This fiscal year, which began Oct. 1, the Del Rio Sector accounts for nearly 90 percent of all large groups encountered by the U.S. Border Patrol nationwide.”

In addition, 4,232 illegal immigrants were classified as “known gotaways,” referring to aliens who have evaded patrol agents but detected by surveillance.

For the 2022 fiscal year, patrol agents at the southern border encountered 98 illegal immigrants whose names were on the terror watch list, which is a record high. In fiscal 2021, agents only encountered 15 such immigrants. And in fiscal 2020, there were only three such individuals.

Data analyzed by The Daily Caller News Foundation (DCNF) showed that there has been a 600 percent jump in “special interest migrants” coming from nations where terrorist organizations are known to be active.

“Anybody that doesn’t think that serious threats to this country are sneaking in right now is naive,” former Border Patrol Chief Rodney Scott told the DCNF.

Meanwhile, President Joe Biden is yet to visit the southern border despite an ongoing immigration crisis. During his recent trip to Arizona to promote new investments, Biden was asked by reporters why he was visiting a border state without checking out the border. He replied that there are “more important things going on,” according to Breitbart.

Recently, the White House dismissed an invitation from House Minority Leader Kevin McCarthy (R-Calif.) that requested Biden visit the border, an act termed a “political stunt” by the administration.