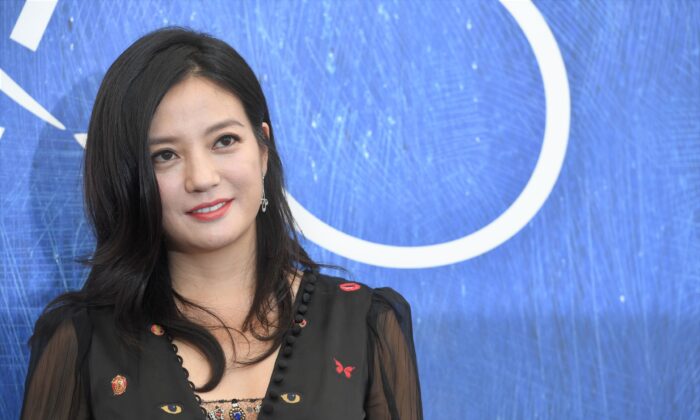 Chinese actress Zhao Wei, member of the jury of the 73rd Venice Film Festival poses during a photocall, on August 31, 2016 at Venice Lido. (TIZIANA FABI/AFP via Getty Images)
Chinese Regime

Chinese leader Xi Jinping is clamping down on the entertainment industry. More than 700 talent agencies in China have been shut down so far this year.

According to commentators in Taiwan and China, the entertainment industry has close ties to CCP officials, and the showbiz storm reflects an unusually fierce factional struggle within the Chinese Communist Party (CCP).

More than 100 talent agencies were canceled in June alone, according to data from Chinese enterprise information website Tianyancha.

On Sept. 2, the China Performance Industry Association released an announcement about “strengthening the self-discipline management of talent agencies,” which requires agencies to assume the responsibility for the [political] education and management of artists. As for artists who “lack bottom line awareness” and who are “insubordinate,” agencies need to terminate their brokerage services. Agencies that neglect their responsibilities … will be punished.

After the meeting, these network platforms jointly issued a self-discipline convention on “Qinglang Network Culture Ecosystem.” It includes opposing “traffic first,” which refers to these platforms only featuring online celebrities with huge followings; refusing to provide a display platform for people who violate laws and ethics, i.e. political correctness; and reporting one another when a violation is spotted.

The National Radio and Television Administration also held a meeting on Sept. 9, demanding that variety shows, such as “Rise of Idols” talent shows and reality shows featuring the children of celebrities, should not be aired, and asking to resolutely resist immoral artists appearing on online platforms.

Tseng Chien-yuan, the convener of Scoop Weekly Taiwan and director of the Taiwan Policy Research Institute, told The Epoch Times that the purge is all about the Xi administration cleaning out the “Shanghai clique,” the group of officials who rose to prominence under former CCP leader Jiang Zemin two decades ago.

Tseng explained that China’s entertainment industry has close ties to CCP officials, business tycoons, and political cliques. It involves high profits and lucrative deals. The industry used to be under the control of Jiang Zemin and his handler Zeng Qinghong. The Shanghai clique has been at odds with Xi since he assumed power. Purging the entertainment industry is a warning from Xi and also a sign of his authority, Tseng said, but it also raises speculations about Xi’s control ability.

Lu Bei, a commentator based in mainland China, believes that China’s economy is strained, and the banks are loaded with bad debt. By cracking down on the entertainment industry, private companies, and Internet giants, the CCP can divide up their assets.

On the other hand, the culture and propaganda system has always been in the hands of those in power, Lu told The Epoch Times. Xi’s crackdown on Chinese actress Zhao Wei (Vicky Zhao) and on tycoon Jack Ma is actually a manifestation of the CCP’s factional infighting. The recent purge of the entertainment industry, in his opinion, shows that Xi is taking control but is facing internal opposition. The ones who got purged are victims of a power struggle within the communist oligarchy.

Zhao Wei and Jack Ma are two examples, Lu said. Zhao used to engage in complicated business deals like shell companies, but it didn’t take long for her to make them work because of the powerful forces behind her. Zhao is close to Jack Ma, and behind Ma are Jiang Zemin’s forces, Lu said. There’s a group photo in which Zhao is seen holding the arm of Zeng Qinghuai, the younger brother of Zeng Qinghong. Xi’s crackdown on Zhao and Ma shows that the two factions are in a fierce fight.