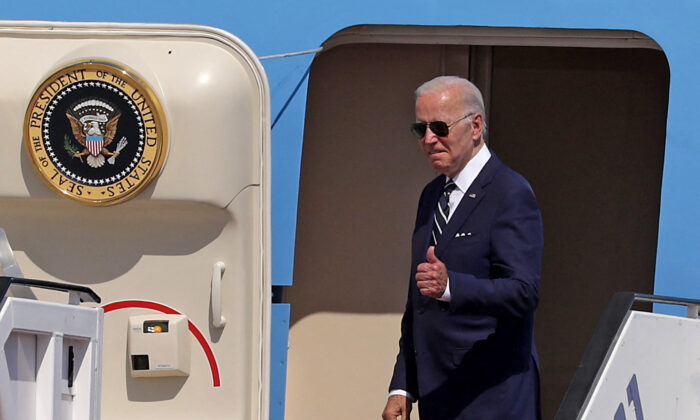 A majority of Americans, 61 percent, blame the Biden administration for soaring inflation, which is currently at a 40-year-high, according to a new survey published by WalletHub on July 20.

The survey was conducted online from July 4 to July 8 to gauge what people know about the interest-rate increases by the Federal Reserve (Fed) and how they impact consumers’ finances.

Another 26 percent blamed Russian President Vladimir Putin, who in February launched a “special military operation” in Ukraine that has affected the cost of everything from oil to food.

Meanwhile, 13 percent of those surveyed blame the Fed for inflation.

With the 12-month Consumer Price Index (CPI) reaching 9.1 percent in June, Fed officials are now widely expected to hike interest rates by as much as 100 basis points next month.

Almost 65 percent of traders surveyed by the CME Group’s FedWatch Tool believe that the federal funds rate will rise by three-quarters of a percentage point.

The central bank is expected to raise its target rate on July 27 in an effort by policymakers to fight growing inflation.

Further rate hikes are expected from the Fed before the end of the year, adding more stress on indebted consumers.

The rate hikes have added $8.1 billion to already existing consumer credit card debt so far this year, and will likely raise it by another $4.8 billion to $6.4 billion by the end of 2022.

About 63 percent of respondents say that their personal expenditures were affected by the recent 1.5 percent increase in Fed rates this year and 48 percent admit that they are financially unprepared for a recession.

One big fear is that the low unemployment figures will start to reverse themselves if the potential stagflation leads to a recession.

At least 56 percent are concerned that the Fed rate hikes will cost them their jobs this year, while 80 percent believe we are already heading into a recession.

“The Fed should have been tapering and raising interest rates already,” said Christopher Ball, an economist at Quinnipiac University.

“If it had controlled inflation better,” he added, “it would have much more reason to hold off on rate hikes during this Ukraine crisis, but it is so late to fight inflation, that it must raise rates or we will have very serious inflation problems and still have a crisis in Ukraine.”

It will be politically hard to continue to raise rates if the U.S. economy hits a recession, as there will be a lot of pressure on the Fed to let inflation rise in order to keep the economy running.

Meanwhile, the White House is facing increasing complaints from voters, as the U.S. economy weakens due to rate hikes at the sensitive time before the midterm elections in November.

With the crisis in Ukraine causing global economic havoc and Biden’s policies regarding Russia and the oil crisis exacerbating the situation, the economy is expected to slow down with a potential “hard” landing by the end of the year.

The pressure by Kyiv on Washington to spend more on military and aid or relief funds for Ukraine is worsening the already high debt that the United States has accumulated.

“We will have to divert funds from other projects just to pay interest on the debt,” said Ball.

As higher interest rates raise expenditure costs, its effect on the federal debt will make any further spending by Congress and the Biden administration very costly, hurting the Democrats’ chances in November.

“So,” Ball concluded, “if we need more spending for Ukraine and more for interest payments, politicians will be left with precious little to sprinkle around to constituents or for big PR projects, and this will also add a lot more political pressure on the Fed not to raise rates or to slow the increase of the rate hikes.”