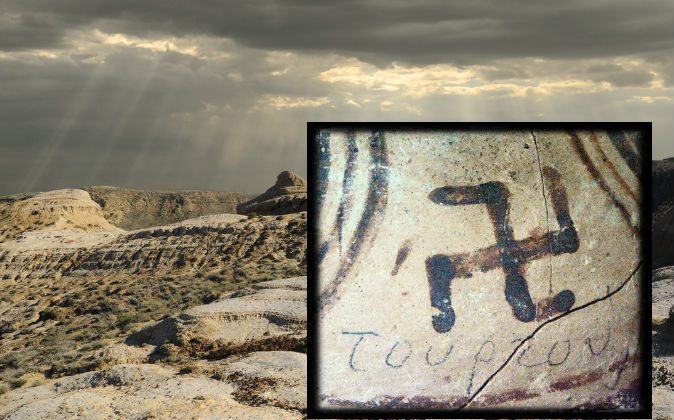 Over 50 Ancient Geoglyphs, Including Swastika, Discovered in Kazakhstan

Archaeologists are calling them the Nazca lines of Kazakhstan – more than 50 giant geoglyphs formed with earthen mounds and timber found stretched across the landscape in northern Kazakhstan. They are designed in a variety of geometric shapes, including crosses, squares, rings, and even a swastika, an ancient symbol that has been in use for at least 12,000 years.

According to Live Science, the geoglyphs, which are very difficult to see on the ground, were first spotted on Google Earth. Since then, a team of archaeologists from Kostanay University in Kazakhstan and Vilnius University in Lithuania, have investigated the giant structures using aerial photography and ground-penetrating radar.

Their results revealed a wide variety of shapes ranging from 90 to 400 metres in diameter, mostly made of earthen mounds, but one – the swastika – was made using timber.  Researchers have not yet dated the structures but their characteristics suggest they are around 2,000 years old.

“As of today, we can say only one thing — the geoglyphs were built by ancient people. By whom and for what purpose, remains a mystery,” said archaeologists Irina Shevnina and Andrew Logvin, of Kostanay University, in an email to Live Science.

The swastika is an ancient symbol found throughout Europe and Asia. The word ‘swastika’ is a Sanskrit word (‘svasktika’) meaning ‘It is’, ‘Well Being’, ‘Good Existence, and ‘Good Luck’. However, it is also known by different names in different countries – like ‘Wan’ in China, ‘Manji’ in Japan, ‘Fylfot’ in England, ‘Hakenkreuz’ in Germany and ‘Tetraskelion’ or ‘Tetragammadion’ in Greece. A Sanskrit scholar P. R. Sarkar in 1979 said that the deeper meaning of the word is ‘Permanent Victory’.

MORE: Where the Swastika Was Found 12,000 Years Before Hitler Made Us Uncomfortable About It

It is not the first time that a geoglyph of a swastika has been found. They have also been discovered in Jordan and New Mexico, and geoglyphs of all kinds have been identified in numerous countries around the world constructed by different cultures, including the United Kingdom, Brazil and even the Southwestern United States.

Despite a plethora of research on these amazing creations around the world, the purpose of the geoglyphs continues to elude researchers and remains a matter of conjecture. Some scientists believe they are linked to the heavens with some representing constellations in the night sky. Other experts believe that the lines played a role in pilgrimage, with one walking across them to reach a sacred place. Yet another idea is that the lines are connected with water, something vital to life yet hard to get in the desert, and may have played a part in water-based rituals. Archaeological excavations at the Kazakhstan geoglyphs revealed the remains of structures and hearths, suggesting that rituals took place there.

*Image of Kazakhstan via Shutterstock