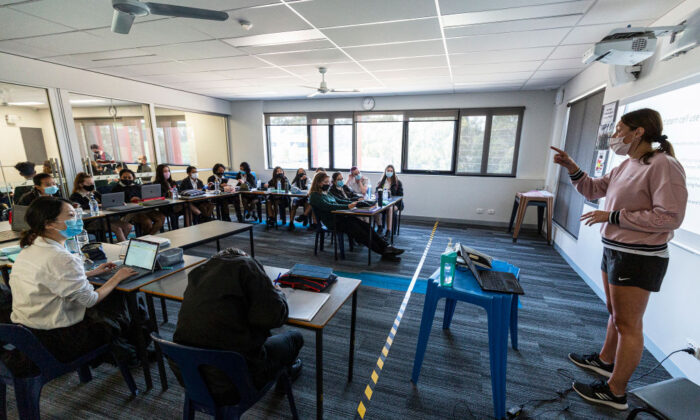 A teacher is seen wearing a mask in class in a file photo. (Daniel Pockett/Getty Images)
Australia

Over 4 in 5 Australian Teachers Considered Quitting Over the Past 12 Months: Survey

According to a new survey, over 80 percent of teachers across Australia have considered quitting the profession in the last 12 months.

The Australian College of Educators (ACE) and National Excellence in Teaching Awards (NEiTA) Foundation conducted a survey of 571 educators and found that while a vast majority (87 percent) said they found it to be a rewarding profession, 84 percent have contemplated leaving.

Three-quarters reported feeling stressed from work, 82 percent struggled with work-life balance, and 37 percent reported little or no satisfaction from the job.

COVID-19 has also caused teachers to spend more time providing emotional support to students compared to before the pandemic.

Many teachers listed behavioural management as the greatest challenge, saying a small minority of disruptive students could have a large, negative impact on the majority.

Almost 70 percent indicated that they spent more than 10 percent of their day managing individual behavioural issues, while 17 percent of teachers said it consumed over half their day.

Most teachers believed that the responsibility of behavioural learning fell on the parents. However, some teachers indicated their frustration with unengaged parents and parents who treated teachers as “glorified babysitters.”

One existing trend is that teachers and schools have become increasingly responsible for the emotional well-being of children.

“So there’s a lot of functions that the family used to do, that teachers and schools are [now] almost expected to do,” he said.

Ahmed said Australia has amongst the highest rates of behaviourally disturbed children among OECD countries. This has created a dimension where teachers need to spend more time managing difficult children or those with an autism spectrum diagnosis.

“The teacher’s role has really changed where they have to manage difficult kids and look out for the mental health of all these troubled kids, which are growing in numbers,” Ahmed said.

Another aspect that makes the teaching profession increasingly tricky for Australian educators is the lack of authority in the classroom.

“The authority that teachers [in Asian countries] have are really high. Whereas here, they don’t have the same authority, parents often intervene,” he said. “It’s expected to be almost a partnership with students, but that can often mean they have a much-diminished authority with children, which I think makes their job harder as well.”

But Ahmed noted typically, in these types of surveys, respondents rarely actually leave the job.

“Sometimes they’re used as a bit of a negotiating tool before some sort of wage negotiations,” he said. “So we should always take these surveys with a grain of salt.”