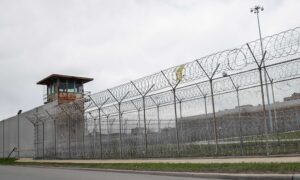 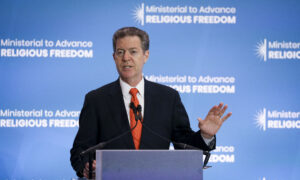 Prisoners of Conscience Imperiled by COVID-19, US Ambassador Says
0 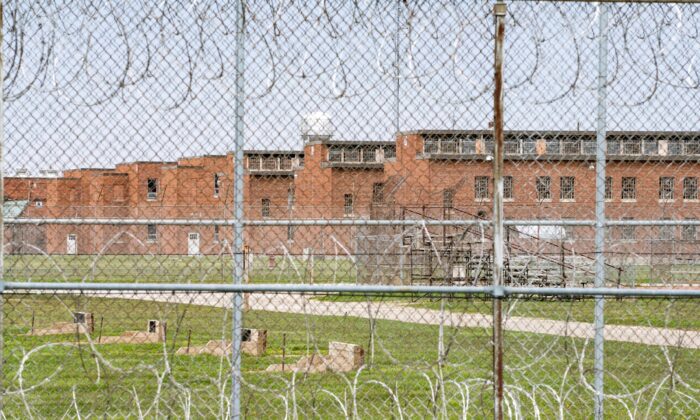 The exterior of the Marion Correctional Institution in Marion, Ohio, on April 22, 2020. (Dane Rhys/Reuters)
AMERICA

Over 3,000 Inmates in 4 State Prisons Test Positive for CCP Virus—Most Without Symptoms

When the first cases of the new CCP virus surfaced in Ohio’s prisons, the director in charge felt like she was fighting a ghost.

“We weren’t always able to pinpoint where all the cases were coming from,” said Annette Chambers-Smith, director of the Ohio Department of Rehabilitation and Correction. As the virus spread, they began mass testing.

They started with the Marion Correctional Institution, which houses 2,500 prisoners in north central Ohio, many of them older with pre-existing health conditions. After testing 2,300 inmates for the CCP (Chinese Communist Party) virus, commonly known as novel coronavirus, they were shocked. Of the 2,028 who tested positive, close to 95 percent had no symptoms.

“It was very surprising,” said Chambers-Smith, who oversees the state’s 28 correctional facilities.

As mass CCP virus testing expands in prisons, large numbers of inmates are showing no symptoms. In four state prison systems—Arkansas, North Carolina, Ohio, and Virginia—96 percent of 3,277 inmates who tested positive for the CCP virus were asymptomatic, according to interviews with officials and records reviewed by Reuters. That’s out of 4,693 tests that included results on symptoms.

The numbers are the latest evidence to suggest that people who are asymptomatic—contagious but not physically sick—may be driving the spread of the virus, not only in state prisons that house 1.3 million inmates across the country, but also in communities across the globe. The figures also reinforce questions over whether testing of just people suspected of being infected is actually capturing the spread of the virus.

“It adds to the understanding that we have a severe undercount of cases in the U.S.,” said Dr. Leana Wen, adjunct associate professor of emergency medicine at George Washington University, said of the Reuters findings. “The case count is likely much, much higher than we currently know because of the lack of testing and surveillance.”

Some people diagnosed as asymptomatic when tested for the CCP virus, however, may go on to develop symptoms later, according to researchers.

The United States has more people behind bars than any other nation, a total incarcerated population of nearly 2.3 million as of 2017—nearly half of which is in state prisons. Smaller numbers are locked in federal prisons and local jails, which typically hold people for relatively short periods as they await trial.

State prison systems in Michigan, Tennessee, and California have also begun mass testing—checking for CCP virus infections in large numbers of inmates even if they show no sign of illness—but have not provided specific counts of asymptomatic prisoners.

Tennessee said a majority of its positive cases didn’t show symptoms. In Michigan, state authorities said “a good number” of the 620 prisoners who tested positive for the CCP virus were asymptomatic. California’s state prison system would not release counts of asymptomatic prisoners.

Each state manages multiple prison facilities. Ohio, for instance, has 49,000 prisoners in 28 facilities. A total 3,837 inmates tested positive for the CCP virus in 15 of those facilities. But the state has not yet provided results on symptoms for 1,809 of them and did not identify the total number of tests conducted across the prison system.

Arkansas and Tennessee have also taken a targeted approach by conducting mass testing in several of their facilities. Michigan, North Carolina, California, and Virginia have started with one facility each.

Most state prisons did not provide the age or other demographic details of those who tested positive for the CCP virus, which has killed more than 200,000 people globally, including more than 53,000 in the United States.

Reuters surveyed all 50 state prison systems. Of the 30 that responded, most are only testing inmates who show symptoms, suggesting they could be vastly undercounting the number infected by the CCP virus.

Florida and Texas, whose inmate populations are bigger than Ohio’s, report a combined total of just 931 cases—far fewer than the 3,837 inmates who tested positive in Ohio. New York, the epicenter of the U.S. outbreak, has reported 269 positive cases among 51,000 inmates. All three states are testing only symptomatic prisoners.

“Prison agencies are almost certainly vastly undercounting the number of COVID cases among incarcerated persons,” said Michele Deitch, a corrections specialist and senior lecturer at the University of Texas. “Just as the experts are telling us in our free-world communities, the only way to get ahead of this outbreak is through mass testing.”

Prison officials in Florida and Texas said they were following guidance from the U.S. Centers for Disease Control and Prevention along with state health officials when testing only inmates showing symptoms of the virus. New York’s Department of Corrections said its policy of only testing prisoners who show symptoms was “reflective of testing procedures in the general public.”

Tennessee took an aggressive approach after a dozen inmates tested positive at the Bledsoe County Correctional Complex in the city of Pikeville last week. The state’s Department of Correction has tested 3,503 prisoners at Bledsoe, the Northwest Correctional Complex, and the Turney Center Industrial Complex.

As of Friday, 651 were positive, and most of them were asymptomatic, the department said.

“It’s what makes the pandemic more difficult to manage,” said Marc Stern, former medical director for the Washington State Department of Corrections and a faculty member at the University of Washington’s School of Public Health. “There are a whole lot of people who are asymptomatic.”

After a recent spike in cases at the Neuse Correctional Institution in Goldsboro, North Carolina, state correctional officials tested all 723 prisoners last week. Of the 444 who were infected by the virus, 98 percent were asymptomatic, the state’s department of public safety said. One inmate has died at the prison.

Similarly, mass testing at two Arkansas prisons—the Cummins Unit in the city of Grady and the Community Correction Center in the state capital Little Rock—found 751 infected inmates, almost all of them asymptomatic, the state corrections department said. It did not provide the total number of inmates who were tested.

Arkansas’s prisons have faced contagious disease outbreaks before, such as scabies and chickenpox, but those episodes were easier to manage because inmates showed overt symptoms, said Arkansas Department of Corrections spokeswoman Dina Tyler. “But with this virus, you have no idea because so many are asymptomatic. It makes it very challenging to contain,” she said.

Michigan’s Lakeland Correctional Facility houses some of the state’s oldest and most medically frail prisoners. When CCP virus cases surged, the prison saw a spike in infections and deaths. As of April 23, nine Lakeland inmates had died from COVID-19, accounting for a third of the deaths across Michigan’s 29 state prisons.

Nearly half of Lakeland’s 1,400 prisoners suffer from chronic underlying health conditions, according to state data. Many are in wheelchairs, and the minimum-security facility in southern Michigan has its own geriatric unit for its large elderly population.

On Tuesday, the prison tested all 400 inmates in the geriatric ward and plans to test the rest of the facility by the end of the week. Of the 971 tested so far, 642, or about 66 percent, were positive. A state official declined to disclose how many were asymptomatic.

“We know mass testing is going to make our numbers spike and might make us look bad,” said Chris Gautz, spokesman for the Michigan Department of Corrections. “But I don’t think there’s another prison system in the country that doesn’t have large numbers. They just might not be testing as rigorously as we are.”

All tested inmates are quarantined in their rooms or units pending the test results, which usually come back in a day, he said. “The 24-hour turnaround is crucial” because once an inmate tests negative, they can return to the general population, he said.

As the CCP virus spreads behind bars, rights groups and public defenders say they fear more will succumb, and have pressed for the release of nonviolent older and medically high-risk inmates. While thousands have been let out, crowded, often unsanitary conditions have raised concerns that jails and prisons could become vectors for the disease.

By Linda So and Grant Smith