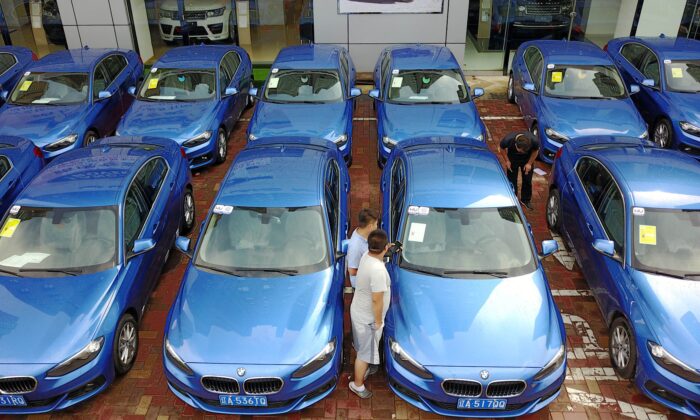 People look at a BMW 1-Series "car-sharing" in Shenyang in China's northeastern Liaoning Province on Aug. 10, 2017. (STR/AFP via Getty Images)
By Olivia Li

The latest data from Chinese research firm ITjuzi revealed that 336 start-up companies in the country, that collectively had raised $2.5 billion, ceased operations last year. Among them were several unicorn companies, each valued over $1 billion.

With China’s slowing economy and investors exercising more caution, tech companies in the country started to feel the chilling effect of a funding shortage, which mostly surfaced during the second half of last year.

E-commerce start-up Taojiji, which came online in August 2018 and targeted shoppers outside China’s major cities, raised $42 million in Series A funding (the first venture capital funding) within two months of its establishment. The shopping platform drew 136 million customers in one year, and its estimated value reached $242 million. However, since June of last year, Taojiji retailers complained that they didn’t get paid on their sales revenue, and by November, employees of the company didn’t receive any salary. In December, after failing to raise new funds from venture capitalists, Taojiji announced bankruptcy. Its unpaid debts to the company’s merchants and suppliers were as high as $230 million.

In the car-sharing industry, about 500 companies registered as new businesses in 2018, but only more than 100 companies actually started to operate, according to Iyiou, a venture and technology-focused news site. As of now, only a few have survived. Even well-known companies could not hold on. Togo, one of the leading companies in China’s car-sharing industry which raised more than $2 million in capital, ceased operating in August 2019.

Lejia Apartment, China’s third-largest rental apartment operator, is one of those unicorn companies on ITJuzi’s 2019 bankruptcy list. It was founded in May 2016 in Nanjing City of Jiangsu Province. “Apartment operators” find business opportunities in the super expensive housing market by signing long-term leases with landlords and then subleasing the properties to young people.

Within less than three years, the number of apartments under its management grew to more than 200,000 units across the country, and the company once had a valuation of over $2 billion. When Lejia suddenly declared bankruptcy in August 2019, many homeowners had not received their rental payments, while hundreds of thousands of tenants were evicted even though they had paid leases for a whole year in advance.

Some other unicorn companies have been operating at a loss, such as TikTok owner ByteDance, an internet technology company founded in Beijing in 2012. Its valuation once reached $75 billion in 2018, making it the largest unicorn company in the world. However, the company suffered business losses throughout 2018, and it continued in the first half of 2019, when the newly released apps, such as video chat app Duoshan and messaging app Flipchat, failed to get as many users as expected.

According to London-based research firm Preqin, in 2018, total investment into China’s tech start-ups reached a record of $112 billion; but in 2019, total investment was estimated to be roughly $50 billion, a more than 50 percent drop year-on-year.

An industry insider told Taiwan Digital Times on Jan. 3 that the cash crunch problem is even more severe for China’s second-tier brands. “Although the Chinese market is huge, small and medium-sized entrepreneurs always have to work hard and work smart to make ends meet,” he said.