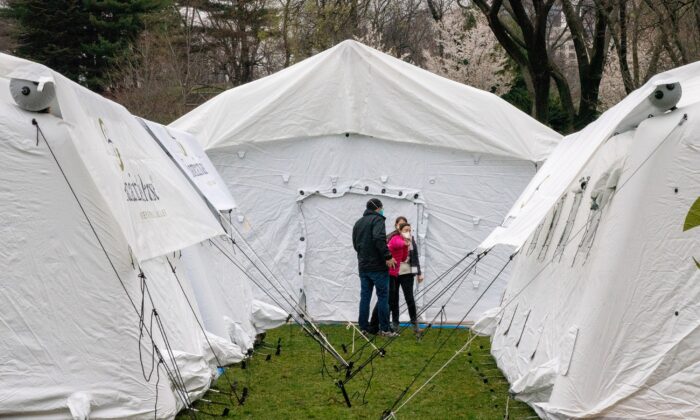 A field hospital is set up by Samaritan's Purse, a Christian humanitarian aid organization, and FEMA at the East Meadow in Central Park amid the CCP virus outbreak in New York City, on March 30, 2020. (David 'Dee' Delgado/Reuters)
NY News

Two hundred and fifty-three people died from the CCP virus in New York in one day, Gov. Andrew Cuomo said on March 30.

The death toll from the CCP (Chinese Communist Party) virus, commonly known as novel coronavirus, jumped to 1,218 in the state, more than 45 percent of all CCP virus deaths in the United States. New York also accounted for 46 percent of confirmed cases in the country, reporting an increase to 66,497.

“What you’re seeing is people who have been on ventilators for a long period of time. The longer you’re on a ventilator, the less likely you’re ever coming off a ventilator,” Cuomo said at a press conference at the Javits Center in New York City’s Manhattan borough.

More than 9,500 patients with the virus are hospitalized in New York, with 2,352 in intensive care units, where many are on ventilators.

While cases, deaths, and hospitalizations in New York continue to rise, the rate of doubling has slowed, officials said. Cases were doubling every two days earlier in the month but now are doubling every six days.

New cases, Cuomo asserted, are connected to people ignoring an order to stay at home except for essential trips, and gathering on playgrounds to play basketball. He threatened to shut down playgrounds if people don’t abide by the order.

Mayor Bill de Blasio said March 29 that people violating social distancing rules will be fined $250 to $500, and he also threatened to close playgrounds.

People can go outside but should maintain six feet of distance between themselves and others.

“I don’t want to fine people when so many folks are going through economic distress, but if they haven’t gotten the message by now and they don’t get the message when an enforcement officer’s staring them in the face saying, ‘I don’t want to fine you, but if you don’t change what you’re doing, I’m going to have to,’ well, you know, that person then deserves the fine,” de Blasio told reporters.

The influx of patients in some parts of New York City, which has the bulk of the cases and deaths in the state, has overloaded hospitals and prompted a number of moves, including transforming Javits Center to a hospital to care for non-COVID-19 patients.

USNS Comfort, a U.S. Navy hospital ship that once helped post-9/11, arrived in Manhattan earlier March 30, while workers were working on opening a field hospital in Central Park. Buildings in other boroughs were being changed into other temporary sites, including Aqueduct Racetrack in Queens and the City University of New York’s Staten Island campus.

Five hundred contract nurses and trained personnel were added to help bolster the medical workforce, de Blasio said March 29, while another 500 were on the way.

“This will help relieve some of the enormous pressure our public hospital staff have been under these past two weeks,” he said.

Hospitals that begin to become overwhelmed should transfer patients to other hospitals, Cuomo told reporters. If an entire system is being overloaded, the system should send patients to another system, he said.