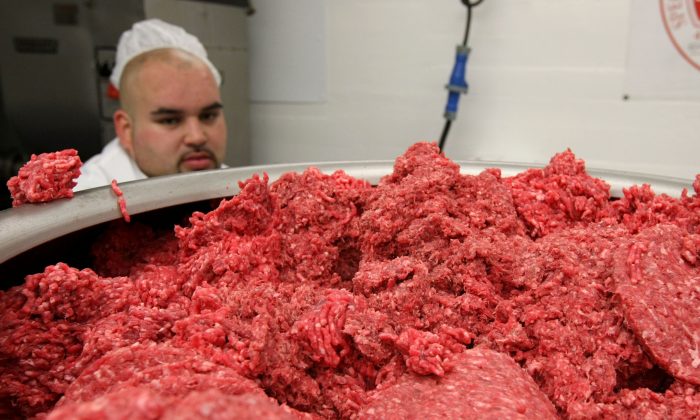 Stock photo showing a worker at a meat packing facility monitoring ground beef as it passes through a machine that makes hamburger patties. (Justin Sullivan/Getty Images)
US News

Over 24,000 Pounds of Raw Beef Recalled After Products Deemed ‘Unfit for Human Consumption’

A company based in Chino, California, has recalled over 24,000 pounds of its raw beef products after being deemed unfit for human consumption, according to the U.S. Department of Agriculture’s Food Safety and Inspection Service (FSIS).

The FSIS announced on Aug. 31 that American Beef Packers, Inc. recalled approximately 24,428 pounds of products produced and packaged on Aug. 21.

The company, founded in 2008, alerted the FSIS on Aug. 30 that a carcass was “erroneously released” before the results of a laboratory test had been confirmed, and then processed it with other raw beef products, according to an FSIS press release.

Inspection personnel from the FSIS then collected a sample of the carcass to carry out further analysis, it said.

The FSIS added that recalled products were shipped to California and Oregon and had the establishment number “EST. 34741” inside the USDA mark of inspection.

Agriculture officials said they are concerned some products may have already made their way to consumers’ freezers or refrigerators, or both.

The recall of raw beef products, which include boneless beef, ribeye and sirloin, applies to those listed below (PDF):

Agriculture officials have since urged individuals with the recalled meat to either return the products to where they were purchased, or to throw the goods away.

“FSIS routinely conducts recall effectiveness checks to verify recalling firms notify their customers of the recall and that steps are taken to make certain that the product is no longer available to consumers,” it said.

The USDA recall was given a ‘Class II’ classification, which means there is a “remote probability of adverse health consequences from the use of the product,” the press release states.

Since the recall was announced, there have been no confirmed reports of anyone suffering adverse reactions after eating the recalled products, the USDA news release reported.

What’s a Food Recall? How is it Decided?

FSIS says that a food recall is a voluntary action by a food manufacturer and is done in the public interest.

“A food recall is a voluntary action by a manufacturer or distributor to protect the public from products that may cause health problems or possible death.

“A recall is intended to remove food products from commerce when there is reason to believe the products may be adulterated or misbranded,” the FSIS explained on its website.

In 2018, there were 125 total food recalls which included 97 class one and 21 class two recalls, according to a summary of the recall cases.

Most of the food recalls are initiated by the manufacturer, but it can sometimes be initiated at FSIS’s request.

“All recalls are voluntary. However, if a company refuses to recall its products, then FSIS has the legal authority to detain and seize those products in commerce,” said FSIS.

The Epoch Times reporter Venus Upadhayaya contributed to this report.