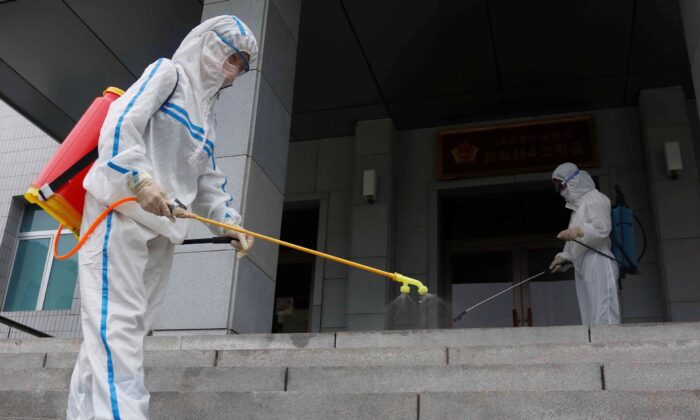 North Korean state-run media said Friday that about 187,800 people were being “isolated and treated” for fever that has spread “explosively” nationwide since late April.

This comes a day after Pyongyang confirmed its first official cases of COVID-19 and moved into a “maximum emergency epidemic prevention system.”

The North’s official Korean Central News Agency (KCNA) reported six deaths from fevers for which “the cause couldn’t be identified,” including one death that tested positive for the Omicron coronavirus variant.

More than 350,000 people were infected with the fever “in a short span of time,” of which 162,000 have fully recovered, according to the news agency. About 18,000 people were identified as having fever symptoms as of Thursday.

Kim urged to isolate all work, production, and residential units while providing inhabitants with amenities to curb the spread of the “malicious virus,” the report stated.

“It is the most important challenge and supreme tasks facing our party to reverse the immediate public health crisis situation at an early date,” Kim was quoted saying by KCNA.

KCNA said Thursday that a number of people in Pyongyang had contracted the Omicron variant, but did not provide the specific number of people who tested positive or possible sources of infection. The samples of the infected people were collected on May 8.

Kim ordered a nationwide lockdown to prevent the highly-transmissible virus from spreading and vowed to eradicate the outbreak. He added that emergency reserve medical supplies would also be mobilized.

The hermit nation’s confirmed infections come more than two years into the COVID-19 pandemic. Pyongyang has claimed to have kept the virus at bay, despite it spreading rapidly across the globe.

North Korea was one of the first countries to close borders and impose severe travel bans, despite reporting zero COVID-19 cases at the time, a claim that was widely questioned by the international community.

According to the latest data from the World Health Organization, 64,207 North Koreans have received COVID-19 testing, and all tests had been found negative as of March 31.

However, it’s unclear if or how many of North Korea’s population of 26 million people have been vaccinated, given that the nation rejected shipments of vaccines from the COVAX global COVID-19 vaccine-sharing program and the Sinovac Biotech vaccine from China, which would require international monitoring.