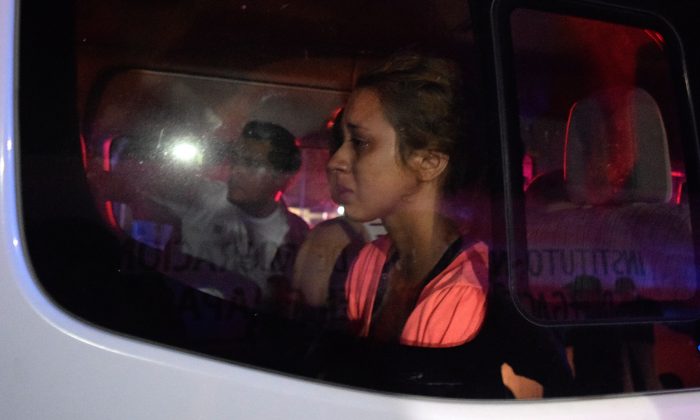 Migrants are seen inside a van after being recaptured near the Siglo XXI immigrant detention center after a large group of Cubans, Haitians and Central Americans broke out and escaped the facilities, in Tapachula, Mexico, on April 25, 2019. (Jose Torres/Reuters)
Americas

Over 1,000 Migrants Break Out of Southern Mexico Detention Center

TAPACHULA—More than a thousand migrants broke out of a detention center in southern Mexico on Thursday evening, authorities said, in a fresh sign of how a surge in arrivals has stretched the country’s resources to the limit.

More than half of the roughly 1,300 migrants later returned to the Siglo XXI facility in the border city of Tapachula in Chiapas state, but about 600 are still unaccounted for, the National Migration Institute said in a statement.

Migrants from Cuba, who make up the majority of the people being held at the center, were largely behind the breakout, the institute added. Mexican newspaper Reforma reported that Haitians and Central Americans were also among those who fled the facility, which has been crammed with people.

Mexico has returned 15,000 migrants in the past 30 days, officials have said, amid pressure from President Donald Trump to stem the flow of people north.

On Wednesday Trump reiterated threats to close part of the U.S.-Mexico border if Mexico doesn’t block what described as a new caravan of migrants headed north.

The majority of migrants moving through Mexico are from Guatemala, Honduras, and El Salvador, but Cubans are also joining in large numbers. More than 1,000 people from Cuba are now in Chiapas, according to Mexican officials.

About 300,000 migrants from around the globe entered Mexico with the intention of illegally crossing into the United States in the first three months of 2019, according to Mexican officials.

The country’s Interior Secretary Olga Sánchez Cordero said at a press conference on April 23 that Mexico had seen an increase in migrants from Honduras and a smaller number from Guatemala, El Salvador, and Cuba along with African and Asian nations, reported local news website Mexico News Daily.

Sánchez Cordero described this migration flow as “unprecedented and unusual” and added that “six caravanas madrecitas” or little mother caravans that have around 2,000 people in each entering Mexico in recent months.

“It’s estimated that during the first three months of the year, more than 300,000 migrants have transited through Mexico to enter the United States illegally,” Sánchez Cordero said, reported radio station KJZZ. “There’s a change in the flow of migrants who are entering our country.”

Sánchez Cordero did not specify how it was determined that these migrants wanted to enter the United States illegally.

On April 18, an Epoch Times reporter who was at the border reported that Border Patrol agents had arrested seven Chinese, one Mexican, and one El Salvadoran minor who crossed the border illegally at Mission, Texas.

“Out with #BorderPatrol in Mission, Texas, and just caught 7 Chinese, 1 Mexican, and 1 El Salvadoran minor. All trying to evade capture. Chinese man said he paid $15k for the whole package (flights to Mexico, smuggled across border),” according to The Epoch Times reporter Charlotte Cuthbertson.

Only one of the Chinese people would speak to us. Thank you to our colleague who translated by phone! out with #BorderPatrol in McAllen, Texas. pic.twitter.com/QZ4Zi1MWrJ

The Chinese man said he plans to claim asylum from persecution, but couldn’t say why he didn’t just fly straight into the United States and do that. He said a friend in Beijing put him in contact with a smuggler. #borderpatrol Mission, Texas. @rgv3307

Moreover, Foreign Affairs Secretary Marcelo Ebrard said that they were not detaining migrants in response to pressure from the United States, adding that Mexico’s immigration policy has not changed and will not change.

Mexican authorities had detained 371 migrants including women and children in Mapastepec, Chiapas, on April 22, but Sánchez Cordero said this occurred because the migrants were acting aggressively toward National Immigration Institute (INM) personnel, reported Mexico News Daily.

The increase of migrants trying to enter the United States is backed up by Customs and Border Patrol (CBP) data.

Earlier this month, CBP said agents encountered over 103,000 individuals on the southwestern border in the month of March. Of those, 92,000 were Border Patrol apprehensions—which is an increase of 35 percent compared to February.

The agency also said that for the first half of the 2019 fiscal year, agents arrested over 385,000 illegal aliens at the southwest border, which is more than double the apprehensions during the same period last fiscal year.

In a recent press conference, acting Department of Homeland Security chief, Kevin McAleenan said the Border Patrol has identified over 3,000 fraudulent family unit cases in the past six months.

“It’s very clear that the cartel and smugglers know the weaknesses in our laws. They know that family units and unaccompanied children will be released with no consequences for their illegal entries,” McAleenan said on April 17 during his tour at McAllen, Texas, reported KVEO.

He said illegal aliens are going to great lengths to seek asylum in the United States, by engaging in what he called child recycling rings, reported Texas Public Radio.

“The same child is brought across the border with an adult multiple times to try and gain that release that family units are required under court order,” McAleenan said.

In a tweet on April 23, McAleenan continued to highlight the problem, saying, “Children making the journey north are the most vulnerable. They’re arriving sicker than ever after the brutal journey—smugglers realize the loopholes in our laws and are exploiting them to profit. @DHSgov is doing everything we can to confront this dangerous epidemic.”

Children making the journey north are the most vulnerable. They’re arriving sicker than ever after the brutal journey – smugglers realize the loopholes in our laws and are exploiting them to profit. @DHSgov is doing everything we can to confront this dangerous epidemic.

Moreover, CBP continued to warn about the orchestrated efforts’ of people smugglers to bring individuals in the United States.

On April 24, the agency released a video showing heavily armed men escorting a woman and her son across the southwestern border.

#BorderPatrol cameras observed armed men escorting a mother and her 8-year-old son to the int’l boundary west of Lukeville, AZ. The armed men dropped off the pair in an area commonly used by smugglers to bring large groups of Central Americans into the country illegally. pic.twitter.com/xwJZZgvlbD

We came across another group of 23 walking up from the river. A mix of adults and children. One family unit from Honduras said they paid $1,800 to get across the Rio Grande from Mexico. #BorderPatrol said the payment was likely for the whole family. Near Granjeno, Texas. pic.twitter.com/rsxFUGaAAK

“#BorderPatrol cameras observed armed men escorting a mother and her 8-year-old son to the int’l boundary west of Lukeville, AZ,” the federal agency wrote on April 23. “The armed men dropped off the pair in an area commonly used by smugglers to bring large groups of Central Americans into the country illegally.”