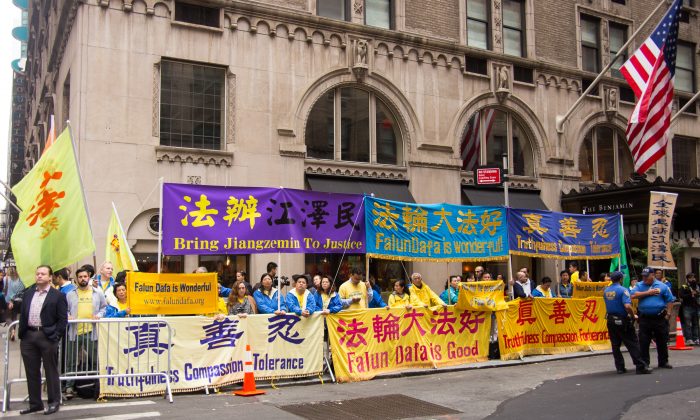 Practitioners of the spiritual discipline Falun Gong call for an end to the persecution of the practice in China, in front of the Waldorf Astoria in New York where Chinese Communist Party leader Xi Jinping is staying, on Sept. on Sept. 28. (Edward Dye/Epoch Times)
China

Outside the UN, Protesters Call on China’s Xi Jinping to Keep His Word

NEW YORK—During his maiden speech to the United Nations General Assembly on Sept. 28, Xi Jinping, the leader of the Chinese Communist Party, remarked that the world today has some way to go in the way of human rights.

“Peaceful development, equity, justice, democracy, and freedom are the common values of mankind and the lofty goals of the United Nations,” Xi told delegates. “Yet these goals are far from being achieved and we must endeavor to meet them.”

Hundreds of protesters will agree. But they don’t think that the current Chinese regime is delivering on those lofty promises, despite the occasion of their being pronounced on the 70th anniversary of the U.N.’s establishment.

If you tell the truth, they kill you. It’s very, very sad.”
— Hiam Alshinnawi, pre-K teacher

Groups advocating democracy in China, members of the local Tibetan community, and practitioners of the spiritual discipline Falun Gong gathered outside the U.N. or near the historic Waldorf Astoria, where the Chinese entourage are staying, to deliver their messages to Xi.

Wearing bright yellow T-shirts or sky blue jackets, they raise banners calling for the Chinese regime to end the persecution of the practice in China, and for ex-Party leader Jiang Zemin to be brought to justice.

“We are a peaceful practice that believes in truthfulness, compassion, and tolerance,” said Ann Sun, a nurse from New Jersey who handed out brochures containing information about the persecution of Falun Gong. The persecution, which has gone on for 16 years, has seen hundreds of thousands detained and abused, many killed for their organs, and left many broken homes, she added.

In August, Sun mailed a criminal complaint to the highest legal bodies in China charging Jiang Zemin, who ordered the persecution in July 1999, of crimes against humanity, joining over 180,000 others in a wave of lawsuits that started at the end of May.

Engaged in a silent standoff with Falun Gong practitioners were members of the local Chinese clan associations. Standing beside dozens of red Chinese flags in thinly manned setups, they displayed placards slandering Falun Gong. When asked, these protesters, who declined to be named, said that they were merely “welcoming Xi Jinping.”

He was alluding to an earlier scene in Seattle where dozens of China supporters bearing red flags stood in front of stationary Falun Gong protesters in an effort to obscure them when the Party leader’s motorcade passed by.

Wang Juntao and over 10 other pro-democracy groups have protested in front of Xi Jinping on every leg of his first U.S. state visit—Seattle on Sept. 22, Washington D.C. on Sept. 24, and finally New York on Sept. 25.

The pro-democracy groups, Wang said, want basic human rights and the development of democracy in China to keep pace with economic development. “In this regard, Xi doesn’t represent Chinese citizens and China,” he added.

The pro-democracy organizations also wish to speak up for the marginalized, downtrodden, and persecuted citizens in China, Wang said. These include those whose lands have been unfairly confiscated by the Chinese authorities, environmentalists, and those concerned with food safety, house Christians, Falun Gong, and journalists and rights lawyers who have been detained for defending these groups.

“These demands should be heard loud and clear in China, but since that’s impossible, we make them here,” Wang said over loud slogans by the 40 odd pro-democracy protesters in blue caps bearing the word “democracy” and white T-shirts with the famous picture of the Tiananmen Square Tank Man.

Protesting Xi Jinping on every leg of his first U.S. state visit was “worth the effort,” Wang added. “People were moved to tears viewing” the protests, he said.

“As long as one person in Tibet isn’t free, everyone in this world isn’t free,” said Wang, quoting an earlier speaker at the space allocated to China democracy advocates.

To his left were Tibetan protesters from New York and New Jersey waving the Tibetan National Flag, which was in use before the territory’s formal annexation to mainland China in 1959.

Sonam Gyatso, president of the nonprofit organization Tibetan Community of New York & New Jersey, said that the Tibetans are requesting that Xi Jinping talk to the Dalai Lama, the Buddhist leader recognized by Tibetans as their religious and secular head, on the several human rights abuses against Tibetans. Tibetans also wish for self-governance following the model of Hong Kong.

“This is a crucial time to solve the issues of Tibet while the Dalai Lama is alive,” Gyatso said. The Dalai Lama, a well-respected figure worldwide, turned 80 this year.

“People are suffocating in Tibet under the tightening grip of the Chinese government,” Gyatso added. To protest the communist regime’s abuses in Tibet—the Buddhist religion is suppressed, natural environment degraded, and Tibetan children undergo forced indoctrination in schools—over a hundred Tibetans have self-immolated in Tibet and China, he said.

Falun Gong practitioners were also at the official protest area near the U.N. headquarters to protest Xi Jinping and the Communist Party. They did slow, rounded exercises to soft music, or stood quietly beside their banners amid the loud cheers and chants from groups protesting the Chinese regime or other authoritarian governments and regimes.

“I like the Falun Gong protest very much,” said Hiam Alshinnawi, a pre-K teacher from Atlanta, Georgia, who was observing the group perform their standing exercises. “It’s very peaceful.”

“If you tell the truth, they kill you,” she continued, referring to the Chinese regime’s persecution campaign against Falun Gong. “It’s very, very sad.”