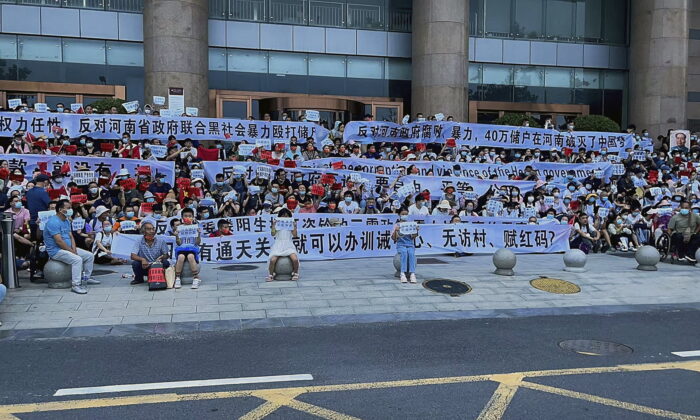 People hold banners and chant slogans during a protest at the entrance to a branch of China's central bank in Zhengzhou in central China's Henan Province, on July 10, 2022. (Yang/AP Photo)
Chinese Regime

Outrage After Henan Protestors Violently Removed From Outside Bank

A large number of Chinese bank customers protesting over frozen deposits were attacked by security forces in plainclothes in the capital of China’s central Henan Province on Sunday. It’s one of the biggest protests being suppressed in recent years.

Photos and videos of the violence that the depositors suffered have spread quickly on Chinese social media, sparking public outrage.

Since April, the funds of four rural banks in Henan and two in Anhui have been frozen by the state, resulting in about 400,000 depositors being unable to withdraw money online, involving 40 billion yuan (US$5.95 billion) in deposits. The bank customers have showed up in person in front of the banks to demand their money.

A smaller protest in May was also crushed by police. In that case, Henan authorities used a health code for preventing the spread of COVID-19 to restrict the depositors’ travel and gathering.

On Sunday, about 2,000–3,000 depositors were peacefully demonstrating in front of Zhengzhou branch of the People’s Bank of China. Many were holding banners and chanting, “Henan Bank, return my deposit!”

Along with their demands, the protestors also voiced their opposition to “the violent treatment of depositors by Henan police … the beating of depositors by the Henan provincial government in collusion with the local gangs”

The protestors further demanded “serious investigations into the officials who are responsible for turning the depositors’ health code red in Henan”, and the depositors also named the provincial Chinese Communist Party committee member Lou Yangsheng over the red health code incident.

Around noon on Sunday, groups of people in plainclothes—dressed in white and black—violently dragged and beat many of the depositors up, forcefully putting them in buses with uniformed police inside sending them to multiple locations for detention.

A bank customer named Zhang Jie (alias) told The Epoch Times on Sunday that the local authorities didn’t show up to communicate with them, but a large number of plainclothes police were dispatched to surround them. “There were about three or four thousand uniformed and plainclothes policemen who surrounded us,” Zhang said.

She said groups of people dressed in white and black came. “I couldn’t tell whether they were gang members or plainclothes police,” Zhang said.

The depositors were angry because they want is to get back their legal deposits, and they were seeking to protect their rights, Zhang said. They are vulnerable people, but these plainclothes policemen treated them all violently, she said.

“There were elderly people, children, handicapped people, and pregnant women among us. Those men in white and black come over, dragged everyone no matter who they were. There was a person in a wheelchair who was also being violently carried away, and a pregnant woman was also taken away by police by force,” Zhang said.

“Almost 2,000 of us were arrested, and then they dragged us onto the more than 40 buses at the scene, and then the uniformed (police) on the buses started to restrain us,” she said.

No Trust in the Regime

The videos of the police violence on the depositors have been widely circulating on Chinese social media Weibo, triggering public anger.

“It’s horrific that the group of men in white beat people with iron rods. Handicapped people were beaten unconscious, and some people’s eyes were bleeding. They didn’t spare women and pregnant women. Heaven is watching, and every revolution starts with bloodshed,” one Weibo post said.

Other netizens said that the actions of the Henan authorities were like that of a triad. “In broad daylight, several unidentified persons beat and kicked depositors! This is an atrocity”; “Henan triad!”; “They don’t treat ordinary people as human beings”; “This is similar to the Tangshan violent incident”; “It turns out that the biggest gang is themselves (authorities).”

There are also many people who saw what happened to Henan bank customers and their legally deposited funds and started to question whether their deposits were safe. “So, is it still safe to save money in the bank? Or shall we all keep money at home?”

One said in a post, “They have lost people’s trust and can never regain it.”

Lin Cenxin and Chang Chun contributed to this report.