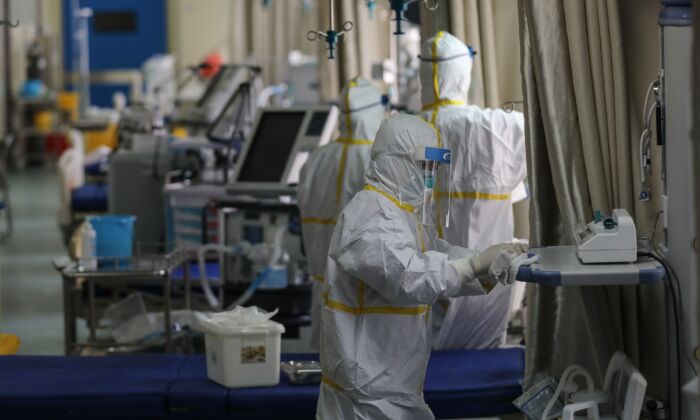 Medical staff members disinfect equipment at a ward used to be an isolation ward for patients infected by the COVID-19 coronavirus at a hospital in Wuhan, China on March 12, 2020. (STR/AFP via Getty Images)
By Nicole Hao

The Chinese regime’s praise for a state media reporter’s propagandist coverage of the novel coronavirus epidemic in Wuhan has triggered public backlash.

During the early days of the outbreak, Liao also kept repeating the regime’s claim that the virus can be contained and that it was not contagious. The Chinese government praised this reporter as a hero on March 8, angering many Chinese.

Liao Jun is in her 40s, and is director of the metro news department of Xinhua’s Hubei province branch (Wuhan is the capital of Hubei). As a senior reporter, Liao has been in charge of reporting on the epidemic in Wuhan since the beginning.

According to a March 8 report in state-run media Guangming Daily, Liao received a copy of an internal document from the Wuhan health commission confirming the outbreak of a viral pneumonia disease, at 7 p.m. on Dec. 30, 2019. She reported the information to the director and other staff in the editorial department. Liao ran her first report on the outbreak the following day.

Liao initially reported that the Huainan seafood market, which authorities have linked to the outbreak, was operating as normal. She also wrote that eight people were reprimanded because “they spread a rumor that the virus is similar to SARS [severe acute respiratory syndrome],” an infectious coronavirus that killed almost 800 people globally in 2002-2003.

She also claimed that there was no evidence to show the disease has human-to-human transmission.

Since then, Liao repeatedly reported that the outbreak was under control, including the fact that the Wuhan city government organized 80 Lunar New Year community activities.

When doctors in Wuhan cried for help on social media, asking for donations of medical supplies such as masks, protective suits, and goggles, Liao reported that the government had organized enough materials to meet the hospitals’ needs.

Reference reports are news information prepared exclusively for Communist Party leaders and members, according to the CCP’s official website.

Liao spoke about her motivation for reporting on the outbreak during a press conference in Wuhan that was organized by China’s State Council on March 8.

“Fighting the epidemic is a war without smoke… We [Chinese state-run media reporters] want to use our pens and cameras as weapons, to loudly tell the world China’s story, China’s spirit, and China’s power,” Liao said.

In the photos that Xinhua released on Feb. 19, Liao and her colleagues are seen wearing full gear—protective suits, goggles, masks, gloves, and shoe covers—to protect themselves while reporting in Wuhan.

In one particular photo, a Xinhua reporter is interviewing a doctor. The former wore goggles, two layers of masks, and two layers of gloves, while the doctor only wore one mask and no goggles or gloves.

At the time, medical staff in Wuhan pleaded for protective suits, goggles, and masks on social media. They said they didn’t have enough protective clothing to use while treating virus patients.

Tang analyzed that Liao is a vivid example of how the Chinese regime uses state media to spread false information. “The government’s ruling is based on lies,” Tang concluded.

On March 13, a group of former Xinhua journalists co-authored an article, headlined: “Reporter Liao Jun is not worthy of being one of our peers!” and posted it onto social media. But it was soon deleted by internet censors.

In Radio Free Asia’s report on the article, a former reporter for state-run broadcaster CCTV surnamed Zhu is quoted as saying: “[The virus whistleblower] Li Wenliang is people’s hero. Liao Jun is the Party’s hero.”