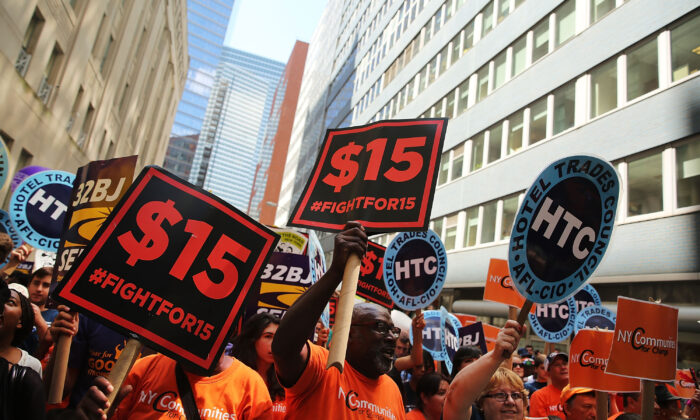 Editor’s note: The Conversation asked a few of its regular writers to weigh in on what will (or should) be the key economic issues of 2016 and offer their predictions. Topping the list are the worsening plight of the middle class, a wager on wages growing again, and why we have less to fear than some of the White House hopefuls suggest.

Middle-income households—those that earn $42,000 to $126,000—are shrinking in number and earning a smaller share of all U.S. income. This gutting of the middle class will only get worse if policymakers do nothing to stem it, which is why it will continue to be an important issue as we head toward the general election in November.

The Pew Research Center recently released a report that reveals that for the first time in almost 45 years, middle-income households now account for only 50 percent of all U.S. households. In 1971, 61 percent of American households were middle-income.

In other words, while the middle class has shrunk, there has been a dramatic increase in households that are either very rich or very poor. This polarization of incomes represents a seismic shift in the fabric of American life.

At the same time, the share for middle-income households plummeted. They had 62 percent of aggregate income in 1970, but only 43 percent in 2014.

American workers, especially those without a college degree, are now less likely to hold middle- or high-wage jobs because most of the positions that have been created over the last two decades have been either high-skilled (and higher-income), or low-skilled (and lower-income). The middle is being squeezed out and left behind.

Changes in the composition and income of the middle class have created an economically polarized society. The most important issue in 2016, and one that presidential candidates will be forced to address, is how to reverse the worsening economic plight of middle-income Americans.

The year 2016 could be the year the country ends its 30 years of wage stagnation and begins attacking income inequality.

The strengthening economy, along with the growing frustration that many are not sharing in it, has elevated wages to the top of presidential campaign debates, while workers and their advocates are already taking direct actions to press for wage increases.

The “fight for $15” minimum wage battle is the most visible form of direct action, one mounted by a coalition of unions and community groups. It has already succeeded in raising wages in 14 states or localities and is on the 2016 agenda in 15 additional cities or states.

Across the country new forms of worker organizing are emerging, including a number that are putting information technologies to work to support workers.

Uber drivers are raising their voices in class action suits and union organizing drives, and apps like Sherpashare, Glassdoor, and others are providing workers the data needed to separate good from bad employers. Watch for more “worker-centric” apps to emerge using information and transparency as new sources of bargaining power while unions use collective bargaining and public pressure to keep forcing low-wage firms like McDonald’s and Walmart to keep raising wages.

A growing chorus of business leaders, from start-up entrepreneurs to Wall Street veterans and social investors, is challenging the corporate focus on maximizing short-term shareholder returns in recognition that companies can produce long-term value for shareholders and provide good jobs with good wages.

The year 2016 will see increased debate over how to make these companies the norm, not the exceptions.

But the best way to fulfill my prediction that 2016 will be the year America starts turning wages around would be to elect candidates who will support and translate these examples into national policies capable of building an economy that works for all.

No Reason to Fear

Fear will be the key business and economic trend in 2016—though it shouldn’t be.

During 2016, fear will be stressed even more than usual because of the U.S. presidential election. Any budding politician understands the easiest way to mobilize voters is to strike fear in their hearts, especially over their own economic condition. By inciting fear, they hope to persuade voters to elect them to solve the problem.

This fear is grossly misplaced. Long-term economic trends across the globe are impressive. Since the year 2000, in just 15 years, the world’s per-person GDP has grown by 20 percent, after adjusting for inflation. It is even stronger in poor areas like sub-Saharan Africa, which grew over 30 percent.

If global growth continues at this rate, in a bit more than half a century the world—every man, woman, and child—will produce twice as much annually as what is produced now. That tremendous growth means twice as many goods like homes, cars, and food; twice as many services like medical care and education; twice as much available for cleaning up the environment and helping the needy.

The world’s economic pie is growing dramatically. However, almost all of us fail to see this growth and the amazing possibilities it presents humanity. Instead, human nature causes us to focus on short-term problems.

Former President Franklin Roosevelt said at his inauguration, “The only thing we have to fear is fear itself.” That statement is as true today as it was during the Great Depression.

Ignore the fear and instead enjoy the growing pie in 2016.