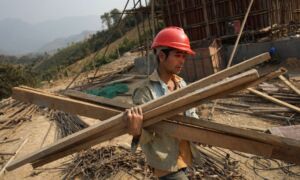 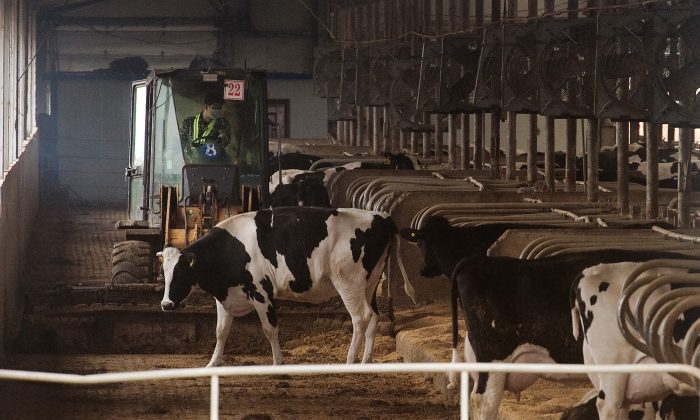 A worker drives a tractor amongst cows inside a dairy farm near Gannan county, Heilongjiang Province, China on May 3, 2016. Giant piles of black manure towering over cornfields, while rancid-smelling effluent from thousands of cows spills onto the land—this is the price of a glass of milk in China today. (Nicolas Asfouri/AFP/Getty Images)
China Society

Outcry and Arrests in China Over Abattoir Pumping Cattle With Water

BEIJING—Police in eastern China have detained 29 suspects linked to an abattoir that pumped up to 120 liters of water over a 12-hour period into cattle to inflate their slaughter weight before being carved up and sold, state media reported on Nov. 21.

The reports did not specify what crime the suspects were being held for, but the case has provoked outrage on social media over the cruelty inflicted on the animals as images of their ghastly ordeal emerged.

From 7:00 pm till dawn, workers at the slaughterhouse would slowly pump water into cattle through tubes inserted into their nostrils before they were slaughtered for the market in nearby Nanjing, a provincial state-controlled TV broadcaster reported.

Stills from a video clip shot by an undercover reporter from the broadcaster showed a swollen cattle on its knees with tears in its eyes.

A number of social media users said the abattoir foreman should be pumped full of water instead.

“Cattle deserve to be treated with dignity too. Think about it, we should be grateful for their selflessness, which has helped fill our bellies,” one social media user wrote.

Beef from the slaughterhouse had been popular due to its prices, which averaged 30 yuan ($4.32) a kg, about 10 percent cheaper than its competitors, according to the broadcaster.

Consumption of beef in China is growing faster than for other meats. But with limited land to produce big herds to meet rising beef demand, China has been stepping up imports. Last year, China shipped in almost 771,000 tons of the red meat worth about $3.3 billion.