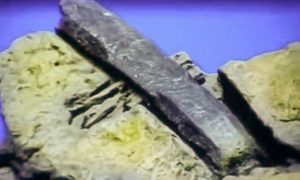 Out of Place in Time: Was This Hammer Made 100 Million Years Ago?
0
Share Now
TelegramFacebookTweetEmailTellMeWeReddit
Copy Link 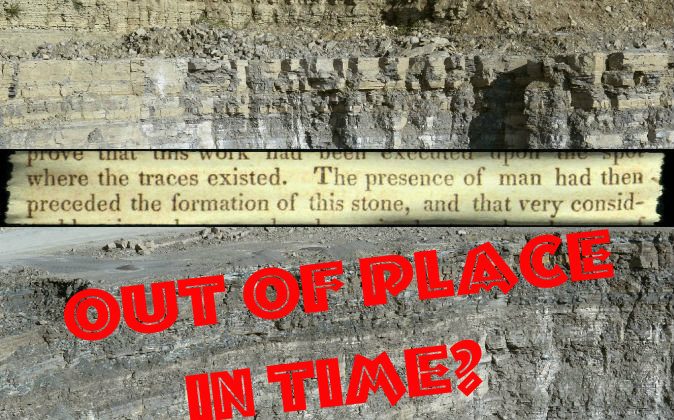 An excerpt from an 18th century record of a find that seemed to date human civilization as much, much older than previously thought. A file photo of limestone. (Achim Prill/iStock; edited by Epoch Times)
archaeology

Out of Place in Time: Petrified Wooden Tools Buried Deep in Limestone

While quarrying stone in Aix-en-Provence, France, in the late 18th century, workers uncovered what appeared to be a very unusual work site. They had dug through 11 layers of limestone, each separated by a bed of sand mixed with clay, and there they found wooden hammer handles and other wooden tools petrified into agate.

Half-wrought stones were also found with the tools.

The discovery was recorded by Count Bournon in “Mineralogy.” His account is translated from French to English in the The American Journal of Science and Arts, v.2, 1820 (pages 145–146).  Bournon wrote: “Here then, we have the traces of a work executed by the hand of man, placed at the depth of fifty feet, and covered with eleven beds of compact limestone: everything tended to prove that this work had been executed upon the spot where the traces existed. The presence of man had then preceded the formation of this stone, and that very considerably since he was already arrived at such a degree of civilization that the arts were known to him, and that he wrought the stone and formed columns out of it.”

“The presence of man had then preceded the formation of this stone, and that very considerably since he was already arrived at such a degree of civilization.”
— Count Bournon

It was long thought that it took millions of years for wood to petrify (turn to stone), but in recent years it has been shown that under special circumstances (being exposed to mineral-rich water, for example) wood may petrify in several years or a few decades.

Glen J. Kuban, a vocal skeptic of a similar find—a hammer discovered in limestone in Texas thought to be some 100 million years old—has said that limestone can form fairly quickly around objects. Concretions, masses of hardened mineral matter, have been known to form around objects from the 20th century.

Did the limestone form around the tools in France in a more recent time or are the tools from a remote age? Were the right circumstances in place to petrify the wooden tools in a shorter period of time, or did the petrification occur over millions of years?

The site in Aix-en-Provence was certainly unusual. The possibility is tantalizing that it could be a work site from a long-lost civilization, far more advanced than a conventional view of history would allow.