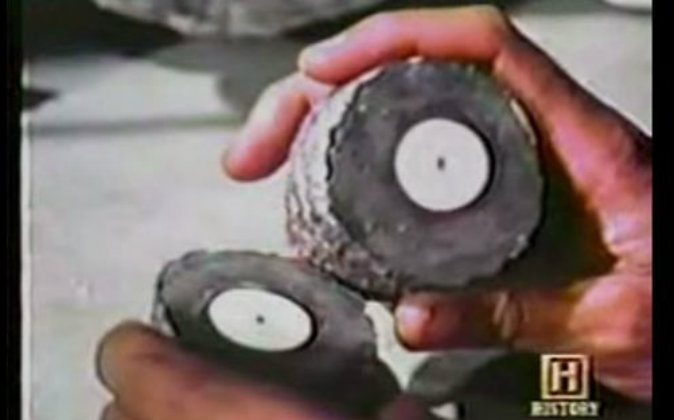 The spark plug found in a formation in California in 1961, known as the Coso Artifact, as shown in a History Channel airing of Leonard Nimoy's TV program "In Search Of ..." (Screenshot/YouTube)
archaeology

In 1961, three people were out searching for geodes for their gem and gift shop in Olancha, Calif. One of them picked up a geode common to the area, “but it somehow seemed different,” explained to Leonard Nimoy in an episode of his TV show “In Search Of …”

Mike Mikesell, one of the three, broke a diamond saw blade cutting through it back at the shop, and he made a shocking discovery. Within the geode he found what appeared to be a modern device later compared to a spark plug—but how old must it be encased as it was in the geode?

It could be as ancient as 500,000 years old, hundreds of thousands of years before advanced civilizations are thought to have inhabited the Earth. Virginia Maxey, another of the three discoverers, said at the time that a geologist examined the fossils around the device and dated the device at 500,000 years old or older.

This claim has been called into question, particularly by Pierre Stromberg and Paul V. Heinrich, who have tried to prove that the spark plug was instead made in the 1920s and encased by a quick-forming concretion rather than a geode.

The only people who have physically examined the artifact are the three people who found it and Ron Calais, who believes the conventional understanding of human history is incorrect. For years, it was on display at the home of Wallace Lane, another of the original three discoverers, though he would not let others examine it, according to Heinrich and Stromberg. The current whereabouts of the artifact is unknown.

The geologist who stated that it was 500,000 years old was never named, causing others to question the study. Heinrich and Stromberg note, however, that “there is little hard evidence that the original discoverers intended to deceive anyone.”

Without the artifact in hand, they say the encasing material was perhaps not a geode, which would indeed suggest the device is ancient. They base their questioning on a description by one of the original discoverers of the device as being encased in a hard clay or rock.

Using X-rays of the object published by Calais and an artist’s rendering, Heinrich and Stromberg sought the help of Spark Plug Collectors of America (SPCA) President Chad Windham. Windham said it is a 1920s-era Champion spark plug.

Those who say the spark plug could be ancient point to a strange spring or helix in the upper portion of the object. This is not seen in modern spark plugs.

Based on Windham’s description, Heinrich and Stromberg said that in the 1920s, the Champion spark plug was made with a “brass hat” that corresponds to the spring, though this part was not included in later designs. There are, however, some differences in the appearance of the plugs.

Windham wrote: “The sketches included [of the artifact] clearly show one rib on the upper end of the porcelain, although Champion used two ribs in this era – probably just an artist’s error.”

Toward the end of this video of Leonard Nimoy’s “In Search Of …” the spark plug, also known as the Coso Artifact, is mentioned: